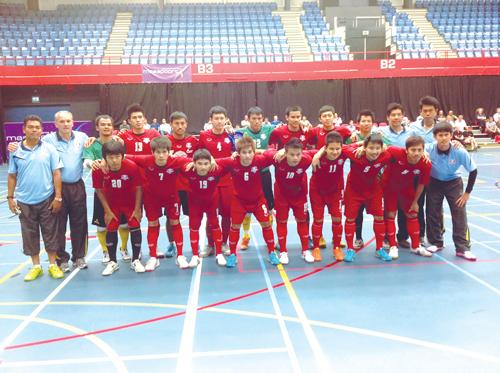 PHUKET: Sitting on a weathered white couch in the VIP section of the Saphan Hin Indoor Sports Complex, Thailand’s national futsal coach, Vic Hermans looks like he’d rather be on the touchline at the Phuket United vs Surat Thani match instead of watching it from the stands.

The Dutchman visited Phuket recently to check out a few members of the Andaman Pearl, as well as seven players on Surat Thani’s team, who currently play for Thailand’s futsal team.

Vic’s enthusiasm for the game rubs off on those he talks to and you get the sense that this is a man whose passion for the game means he would happily talk about it for hours. As with most fans who watch Phuket United, he agrees that the three Brazilians – Jackson Santos, Marcos and Jardel – are the stand out players.

“He looks like the leader of the team. He tells the players, even the coach what to do. He will be a manager one day.”

Vic Hermans started his career as a player for the football team MVV Maastricht in Holland, before crossing over to play futsal. As a futsal player, his career spanned 23 years: winning the Dutch league five times, capped 50 times for the Dutch national team and in the 1989 Futsal World Cup, held in Holland, he was crowned the tournament’s most valuable player.

When his playing days finished, Vic embraced his role as manager for the national teams of Hong Kong, Malaysia, Iran, Malta and now Thailand. He doesn’t believe futsal as a game has changed much over the years.

The Thai national team has not played a competitive match since last November’s World Cup – won by Brazil – which was held in Bangkok.

Thailand made it to the second round before eventually losing 7-1 to the beaten finalists Spain. Vic was happy with his team’s performance, as they have never made it past the group stages in their three previous world cup appearances, but the gulf in class between teams such as Spain and Brazil compared to Thailand was evident to anyone who followed the World Cup.

Vic told the Phuket Gazette that in order for the Thailand to catch up, the futsal infrastructure in the country needs to change

“The Thai national team is number one for the people but I think the league is more important. The league in Thailand is so important, as every week they play games at a high level. Thailand must have a well structured league competition. The league must be played regularly from August to March – that’s the main priority.”

The current GMM Thailand Futsal Premier League has come to an end and focus will once again shift to the national team.

He added: “The other thing is in Thailand we have a lot of young players and there is nothing for the young players.

Spain and Brazil are the dominant futsal nations and Thailand should follow their lead to help the country evolve as a futsal nation, not only in the way they play, but the actions of the players off the pitch.

“What we should do is look at teams like Spain, Argentina and Brazil and see what we can take from them. For example, their mentality and how they prepare for a game, how they [spend] their rest time. Thailand’s players, when they finish the game, they go to their room in the evening and look on YouTube and [other idle activities]… no no.

When you watch Spain’s team or Brazil’s team, watch what they do after a game – massage, healthy eating, rest. Our Thai players can learn a lot from that mentality.”

Obviously, the top futsal nations also show Thailand how a team should perform on the pitch.

“We must think more tactically. The Brazilians can play slow but here they think we must play fast. Controlling the game with the ball is key. When you have the ball I cannot score. When we have the ball we try to move it too much, too fast… I tell them to wait, wait.”

The honor of hosting the Futsal World Cup was not lost on Thailand, even if the country suffered the indignation of failing to construct the tournament’s 12,000-seater indoor futsal stadium in time for the Cup. Vic hopes that his players used the World Cup experience as a learning curve.

Vic has a lot of faith in his project but he is aware that it will be a long term one. The country as a whole needs to work together to help futsal grow and move on to the next level.

“I think Thailand can be level with Brazil and Spain. But we need to make a project and decide what we are going to do at certain points. Have projects for kids. Make Phuket important, make Lamphang important, make Chiang Mai important and you will see you have a lot of potential from players. You must find discipline with the players and you have to give them direction.”

Vic Hermans knows which
direction Thailand needs to go in order for the national team to catch up with Brazil and Spain in the long run, but he will need help from Thailand’s futsal league, clubs and players.

In the short term, Thailand will compete at the 4th Asian Indoor and Martial Arts Games to be held at Incheon, Korea, from June 29 to July 6.