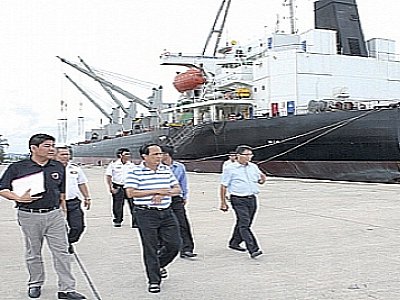 PHUKET: Transport Minister Charupong Ruangsuwanm has told a consortium of Phuket officials and the operator of Phuket’s Deep Sea Port that he will raise the problem of the stalled 100-million-baht plan to develop the facility with Cabinet.

However, Mr Charupong said the project must clearly provide benefits for local people if the plan is to go ahead.

Mr Charupong was in Phuket last Saturday to hear in person what the expansion plan entails. His visit follows that of Deputy Transport Minister Kittisakdi Hathasongkorh in December, who vowed to support the plan to expand the port, which has run aground over its environmental impact assessment (EIA) report.

Wattanachai Raunglertpanyakul, Director of Chaophaya Terminal International Co Ltd, which has the government concession to operate Songkhla and Phuket Ports, explained in December that not one local resident surveyed as part of the EIA agreed with the expansion project.

“The residents are afraid that the runoff from the construction and extra activity will affect the water so much that it will impact their livelihoods. Not one person has agreed with the project, and so the EIA has not been approved,” he said.

Mr Wathanachai explained that the project, to cost more than 100 million baht, includes extending the dock by 60 meters so two large ships can dock at the same time.

“This involves dredging about 4,000 square meters of underwater earth. We will also install two large mooring poles in the bay,” he said.

“The main objective of the expansion project is to enhance the capability of the port to be able to handle ships from 9,000 to 20,000 dead weight tons. Big ships should easily be able to dock at the port to load or unload goods or passengers,” said Mr Wattanachai.

The plan aims to expand the facility to cover 106 rai of land.

However, it has been the rising number of cruise liners bringing tourists to Phuket that is fueling the need for expansion, said Mr Wattanachai. “A lot more cruise liners are coming to Phuket, about 150 to 200 each year. In 2010, 164,422 passengers from both Asia and Europe passed through the port. In 2011, that number rose to 200,559 passengers,” he said.

He repeated his explanation that the Phuket Deep Sea Port was originally designed to be a cargo port only, and that [the addition of passengers] was causing the problem. “Phuket has recently become the main passenger port on the Andaman coast, but the port cannot accommodate two large cruise liners at the same time.

To cater to the rising number of tourists using the port, the expansion plan includes building a separate passengers’ lounge and improving the roads and parking spaces, Mr Wattanachai explained.

Despite Mr Wattanachai’s best efforts to describe the “public benefit” to be gained from the expansion project, Transport Minister Charupong said, “The Government has no control over the committee of the Office of National Environment Board because they are an independent agency, but after hearing about this problem, I can tell you that this has happened not only in Phuket; it has also happened in other places.

“I have discussed this issue with Cabinet members. They suggest that the public and private elements of the project should be clearly separated. Otherwise, the project cannot be approved easily. Anything that will benefit people at large should be highlighted first,” he added.

Mr Charupong cited the Koh Klong Pee project as a good example of a project that had received approval from the Government despite underlying environmental concerns.

Prime Minister Yingluck Shinawatra and her Cabinet, at the mobile Cabinet meeting in Phuket in March of this year, granted special permission to build the Koh Klong Pee project, which includes an elevated road over a protected mangrove forest, so that motorists in the south of Phuket would have easier access to Phuket Town.