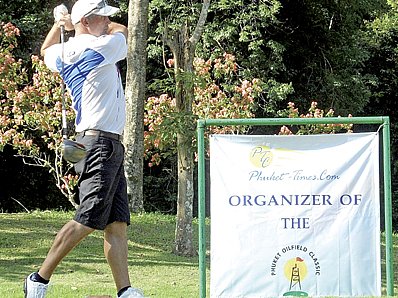 PHUKET: In April 2009 over 100 international guests arrived on the island to take part in the maiden Phuket Oilfield Classic golf tournament. Primarily an oil and gas golfing event staged to raise awareness and funds for Phuket charities, organizers are eager to encourage greater involvement from local players.

The fourth annual Phuket Oilfield Classic charity golf tournament will take place from April 5 to 8, at the Red Mountain Golf Club and the Loch Palm Golf Club with more than 200 overseas visitors expected to participate.

This year an additional event will also be staged at the Phunaka golf course on the Thursday before the main competition when the exciting new format of PowerPlay Golf will be introduced to Phuket. In a risk and reward, nine-hole version of the game, golfers can choose to play to an easy white flag or difficult black flag on each green to earn extra points in this lead up to the main tournament.

Phuket Oilfield Classic organizers suggest this event is an ideal opportunity for local companies to tap into a market segment (oil and gas executives) not usually catered for on the island and even with the possibility of over 200 visitors entering the competition there will always be room for more Phuket local players in the event.

Now that this is a yearly fixture it is intended that a Phuket-based charity will be chosen on an annual basis, and for 2012 the charity chosen is The Phuket International Women’s Club, who do a fantastic job in creating educational based scholarships for children.

This year’s tournament winners will earn the chance to win trips to South Africa and Hawaii as Thailand representatives in two major World Final events. The winning four ball team will get to play in the Asian Masters Senior Tour event as guests while a car or US$20,000 cash are on offer for Hole In One successes.

Over 1.4 million baht has been raised for local charities so far and after the natural disaster in Japan last year 100,000 Yen was raised for victims of the tragedy which was returned with Japanese professional golfer Mina Nakayama from Osaka, who participated in the tournament. The remaining monies were used to educate the “POC Class of 2011/2012” under the stewardship of The Phuket Has Been Good To Us Foundation.

The Phuket Gazette is a sponsor of this event.