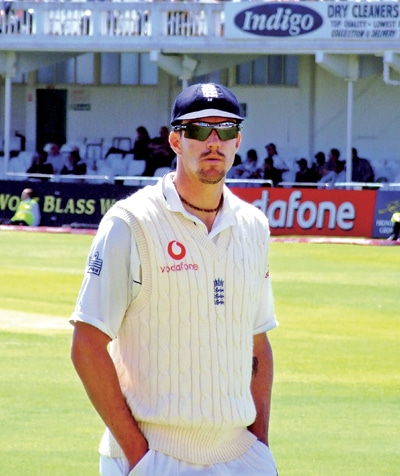 PHUKET: Kevin Pietersen, who has a reputation for dropping bomb shells – and not just while he is at the crease – has announced his retirement from limited overs cricket.

Yes, considering the fact that “KP” (as he is known to followers of the game) was voted ‘Player of the Tournament’ in England’s Twenty20 triumph at the last World Cup. He had a batting average of 62. In a format where team totals rarely exceed 190, that is a stupendous achievement.

Apparently the English Cricket Board does not allow players to choose between playing either one day or Twenty20 formats. It’s all or nothing, and KP is opting for nothing.

But he is also on record as saying that “were the selection criteria not in place, I would have readily played for England in the upcoming ICC World Twenty20.” Clearly, Pietersen is not one to be tied down, either by the opposition bowlers or by the dictates of the English game’s governing body.

We know about his headstrong antics: his spat with Peter Moores, then the England coach, in India, and his recent tweeting denunciation – which incurred a reported 3,000-pound fine – of Nick Knight’s role as a cricket commentator.

There must be other reasons. In company with several other English Test players including Graeme Swann, he apparently now has less enthusiasm for “one dayers”, despite 4,184 runs at an average of over 48 in that format.

It is also evident that, at 31, he feels the need to conserve his energies and, in his own words, “to consider the intensity of the schedule and the increasing demands on my body”.

That may well be a fair assessment, but it is worth remembering that other top-notch batsmen – Ponting, Kallis, Tendulkar and Hussey among them – have continued to play limited-overs cricket with considerable success until their late thirties.

Perhaps KP has other agendas. The shortened forms of the game demand that players attempt more precarious shots, and even, in Pietersen’s case, invent them. Indeed, he is widely known for popularizing the “switch hit”, whereby a player changes his stance during the bowler’s run-up, and plays as a left-hander.

As a batsman whose supreme gift lies in driving the ball straight and with great power in the “v” between mid-off and mid-on, he knows that contrived and cross-batted strokes are fraught with infinitely more risk than shots played with the full blade of the willow. As Eoin Morgan, a brilliant limited-overs player can attest, bringing your unconventional one-day shots to the test arena does not always work.

Money may be a factor. KP will still make himself eligible for the Indian league (IPL), where he plays for the Delhi Daredevils for a reputed fee of 1.28 million pounds. Not bad for six weeks’ work.

Certainly, the financial rewards in the sub-continent are far higher then anything he can earn by playing for his country. He is, moreover, a married man with a young family. Those considerations are bound to have played a part in his decision-making.

His resolve has polarized expert opinion. Jonathan Agnew of the BBC has defended his decision; so too Geoffrey Boycott, who maintains it is a distant legacy of his treatment by the selectors when they relieved him of the captaincy.

On the other hand, Patrick Collins of The Daily Mail has described it as “resentful”, and former captain Michael Vaughan as “staggering”. Unsurprisingly, the current England coach Andy Flower says he “tried to dissuade him”.

But unless there is a change of heart somewhere fast, Pietersen is going to be lost to the game of one-day cricket. England’s most exciting, most enigmatic, most powerful and arguably most talented batsman is going to be sorely missed.