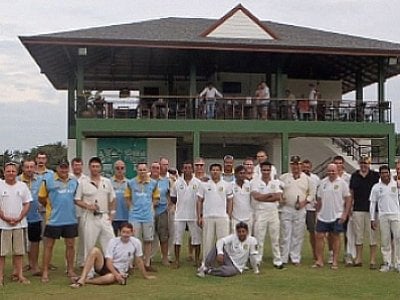 Saturday’s game, though deemed as a friendly warm-up game, was a close match with the local boys scoring the winning runs with only five balls to spare.

Sunday was all about the hotly contested ‘Sensible Cup’, which the PCG won after a five-wicket victory.

The SCC boys arrived at the ACG anticipating perhaps an easy game, but Phuket had other ideas. Batting first, the Singaporeans could amass a total of only 166 all out (29.2 overs) largely due to a stellar bowling performance by Manish Sadarangani (4 for 19).

The good bowling performance was backed up by a great show at the crease by Sadarangani (31) and Dave Thomas (26). The PCG eventually won in exciting fashion in the penultimate over (168 for 7).

Greeted by fantastic weather conditions on Sunday, the teams were at the ready to contest the ‘Sensible Cup’. A fired-up Singapore side won the toss and elected to set the PCG a target to chase – a total of 169 scored by the end of the innings. A Beer helped his team’s cause by smashing 50 runs in a very fluid innings for the SCC, whilst Sami Ullah bowled two great spells (3 for 26).

A confident PCG strode out to the middle and made light work of the run chase. Simon Wetherell set the pace, scoring 50 from 29 balls, backed up by solid batting from Mr Henry (30) and Chand (34).

The PCG boys are proving to be a hard nut to crack for visiting teams and are quickly establishing a reputation as not only in-form cricketers, but also fantastic hosts. More in-bound tours later in the season will once again give them the opportunity to enhance this well-earned reputation.

The Phuket Cricket Group will host a fund-raising T20 match in honor of Chris Hart this Sunday (November 18) and would like to invite all to join at the ACG for this noble cause.