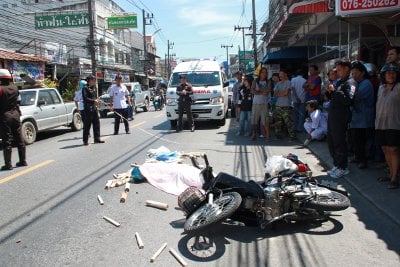 PHUKET: The British Embassy in Bangkok has issued a plea for all travellers in Thailand to observe road safety traffic regulations in a bid to eliminate the deaths and casualties in Phuket and the rest of Thailand.

The news comes ahead of the “World Day of Remembrance for Road Traffic Victims” on Sunday.

“To mark the World Day of Remembrance for Road Traffic Victims the British Embassy Bangkok is hoping to raise awareness of the day and warn people of the dangers of driving abroad. There are over 25 million vehicles in Thailand, a high proportion of which are motorcycles and mopeds.

“Sadly, road traffic accidents in Thailand account for the second most frequent cause of death among British nationals as well as a high number of hospitalizations. The majority of these involve motorcycles and mopeds. Although it is compulsory for the rider to wear a helmet in Thailand, many do not do so,” said a press release issued on the embassy website today.

Embassy staff noted some of the key factors behind accidents involving visitors abroad, which can be seen here.

“Regrettably some of these people suffer life changing, incapacitating injuries. It is not uncommon for families to have the additional worry of mounting hospital bills as either the motorbike’s engine size or the failure to wear a crash helmet invalidates many travel insurance policies,” said the release.

For more information on how to prepare for driving abroad, visit the British Foreign & Commonwealth Office website here.

British suicide victim to be cremated in Phuket

Phuket Sports: SCC lose despite Beer flowing at the crease