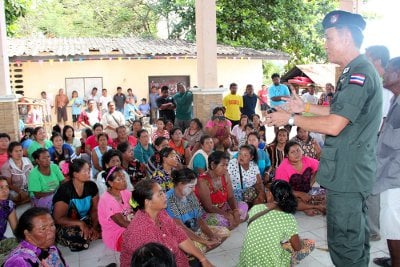 PHUKET: A protest by about 200 residents from the sea gypsy community at Baan Laem Tukkae on Koh Sireh yesterday won a temporary reprieve against a developer taking over 11 rai at the small beachfront village on the east side of Phuket Town.

Nikom Ukhati, a surveyor from the Phuket Land Office, explained that he and a team of officers arrived to confirm the boundaries of the 11-rai plot after receiving an official request from the registered landowner.

“As soon as we arrived, these people tried to stop us. We tried for an hour to explain to them what we were doing, but they still resisted. Eventually we had to give up,” he said.

Mr Nikom said the villagers feared being forced to vacate the land, which they have occupied for generations.

“The sea gypsies say they have lived here for a long time, and when they saw that we had come to measure the land and mark the property boundaries, they were afraid that they would be driven away by people who claim they are the legal owners of the land,” Mr Nikom said.

“They have now requested that the land ownership documents presented by the developer be verified, and they called for an investigation into how the documents were issued,” he added.

Mr Nikom pointed out that as soon as his team stopped marking the plot boundaries, the villagers ceased their protest.

“They agreed to stop the protest as they saw we had stopped our work. We told them we will hold a meeting to discuss this issue again,” he explained.

Village headman Suthon Pramongkij told the Phuket Gazette, “Baan Laem Tukkae villagers have been living here since 1927. Back then, it was a neglected, unoccupied piece of land.

“The village was formally established in 1958 when Somdech Phra Srinagarindra Boromarajajonani, HM King Bhumibol Adulyadej’s mother, visited the village, named it ‘Baan Laem Tukkae’ and gave every sea gypsy the right to use ‘Pramongkij’ [fisherman] as their family name,” Mr Suthon explained.

The village is now home to about 300 families with a combined population of about 1,600 people – all living on 16 rai.

The battle for the sea gypsy community to keep their village out of the hands of developers has been ongoing for years.

“Business owners push government officers into issuing Chanote titles for our land, our homes and our workplaces. When we stand up against them, they disappear for awhile, but they always come back.

“We will not allow anyone to take our homeland. We will fight until our last stand,” said Mr Suthon.

“We did not know a Chanote title had been issued for our land until the officers came here to measure the boundaries. We have been living here for so long, we do not want to move elsewhere,” he added.

Phuket Sports: SCC lose despite Beer flowing at the crease