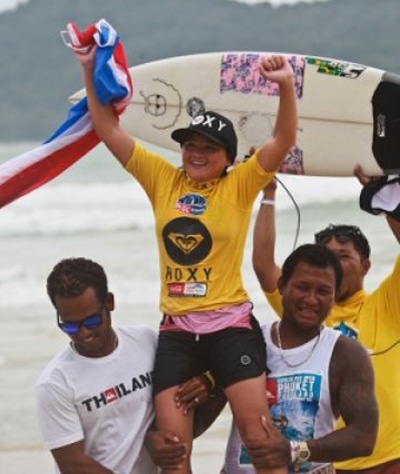 “I’m feeling so stoked right now,” said Semadhi in his post-final interview. “Actually I’m so tired of getting second, finally I got a first”

Ronda, who hails from Kuta Beach in Bali, Indonesia was equally happy with his second consecutive Asian Surfing Championship Men’s Open title, saying, “I’m was so proud to be the first Asian Surfing Champion and now to repeat that and win it again is an even bigger honor, I’m so thankful to my family and my sponsor and my friends for supporting me. Thanks also to the ASC for giving us this tour where we can surf and compete around Asia, and come to awesome places like here in Phuket”

It was a tense and exciting 25 minute Men’s Open final with a lot at stake, especially for Raditya Rondi and Lee Wilson, both in the race for the 2012 Coca-Cola Indonesian Surfing Championship title with one event remaining. If Wilson were to win the Quiksilver Open Phuket, he would win the 2012 Indonesian Championship title, his 3rd. Anything less and the title wouldn’t be decided until next month at the final event in Kuta Beach, Bali.

With the crowd on the beach glued to every surfer’s move on every wave coming through in the afternoon sun, Mega jumped out to a commanding lead, consistently launching and landing aerial maneuvers like he was on autopilot. Both Wilson and Rondi appeared to be feeling the pressure, with Wilson landing an aerial for a 4.5 point score with his first wave and then failing to find anything until near the end of the final, sitting in fourth place for most of the 25 minutes. Rondi struggled until midway through the heat, when he finally shook off the nerves and banged out a couple of scores to grab 3rd place. Made Darmayasa meanwhile was sitting comfortably in 2nd spot, feeling no pressure and just having fun.

Then it all came down to the final minutes, when Wilson smashed out a 7.0 score on a left hand runner, which got him up into second place and needing a wave score of only 5.3 points to win the contest. But with just seconds to go before the horn blew Rondi caught his last wave and blasted away. Everybody on the beach as well as the finalists waited in anticipation for the MC to call out the score, as Rondi needed better than a 6.0 to get into second place, the score was announced…a 6.1! So Rondi was up into second place, Wilson down into third place, meaning the Indonesian title will be decided at the final contest of the year in Kuta Beach next month.

The final day began with Grommet Division (under 16 year old surfers) action, where Phuket’s own wonder-kid, 14-year old Annissa Flynn from Kata Beach, beat the boys to win the division. She went straight into the Women’s Division and took that win as well claiming the 2012 Asian Surfing Championship Women’s title. An amazing feat for a girl who only started surfing five years ago. After receiving the trophy from Quiksilver’s Stephanie Gilmore, she said, “I’m so happy, I can’t tell you how happy I am to win this title. It’s like insane that in 5 years I’m now the Asian champion!”

Gilmore complimented Flynn saying, “I think this is a really special moment for Thailand, to have a local Thai champion. It’s an amazing award for you, to beat the boys and the girls”

Other highlights of the day included Bali’s Wayan “Cupak” Widiarta winning the Masters Division and Arip “Mencos” Nurhidayat and Luke Landrigan going head to head in the Longboard Division with Mencos coming out on top and winning his 2nd consecutive ASC Longboard title.

The full day ended with the awards presentations held in the Phuket Graceland Hotel, as the beach-side venue that had been prepared was awash with torrential rain and howling winds, so everything had to be moved indoors.

There had been some back and forth with budget concerns of being able to provide the mass testing and who would pay how much for continued testing. Perhaps requiring people to quarantine in Phuket is cheaper than testing them when they arrive (cheaper for Phuket officials anyway).

The original scheme was set to expire May 15, and announcements were made about extending the plan and stopping testing right away. For now, this debate seems to have settled on replacing the testing with a mandatory quarantine upon entering Phuket.