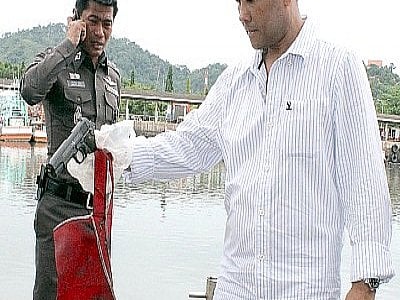 PHUKET: Phuket City Police have given up their attempt to net a pair of brazen gold thieves at a fish factory today.

They have now issued “wanted alerts” for the two men to police stations throughout the neighboring provinces of Phang Nga and Krabi.

Included in the alerts are images of the two wanted men, who police believe are Burmese, and descriptions of the clothing they changed into after stealing almost 3 million baht’s worth of gold jewelry.

Both men were wearing black t-shirts and one was wearing a black shirt* with “LAMPARD 8” embroidered on it at last sighting.

*Correction: The original report stated that one of the men was wearing a black hat emblazoned “Lampard 8”. Our apologies for the error.

Phuket Sports: Quiksilver Open finishes on the crest of a wave