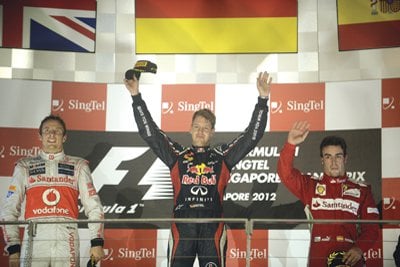 PHUKET: Singapore was a tragedy for Lewis Hamilton and McLaren. Hamilton would have been the clear winner, until his gearbox disintegrated and catapulted Vettel into first place, Button to second, and most importantly, Alonso into third place.

That changed what might have been. A resurgent Vettel is now hunting down Alonso, and Hamilton has dropped to the back of the chasing pack.

There are six races to go, and any of the leaders could take around 10 points per race out of Alonso’s lead. That assumes those in the hunt win with 25 points, and Alonso does no better than third.

So those less than 60 points adrift still have a mathematical chance of winning the Drivers Championship. To claw back 60 points would require the same driver to win all six races, which is unlikely, but Hamilton has said he is going for it.

Anyway, Vettel, 29 points adrift, Räikkönen, 45 short, and Hamilton 52 behind are still in with a shout. Webber and Button are too far behind now. But of course Alonso could yet have another disastrous race or two, closing the gap with those who chase him.

In Singapore, Renault supplied Magneti Marelli alternators – pre-dating the Monza and post-dating the Valencia fiascos – and none of the Renault engines failed. Red Bull is considering a new alternator supplier, but Renault may be close to understanding the problem.

At Monza they luckily recovered a Lotus alternator that only nearly failed, so unlike the Red Bull one, it was not all melted. They are even now examining its entrails.

In another development, Malrussia’s Charles Pic and his crew have received the unusual sentence of one day’s community service to the FIA’s Road Safety Campaign for unsafe behavior on track. This may seem more onerous than the usual 5,000 Euro fine, but remember Schumacher’s penalty in 1997, when he was required to take part in road safety work for the FIA. It became his Road to Damascus, and ever since he has been a road safety spokesman around the world.

And the rumor mill had been fed a tidbit. A leaked copy of the 2013 calendar shows three question marks and a puzzle. The question marks are over New Jersey, which is not yet an approved circuit, South Korea, where negotiations are ongoing, and the German GP whose location is not yet finalized. The puzzle is why there is a three week gap between Silverstone and the German GP. Could it be that there is a shadow race, mayhap a French GP in the wings?

The next race is on October 7. It is the Japanese GP at Suzuka, the Honda owned track where Vettel, Button, Alonso and Räikkönen have dominated the last five outings. Hamilton’s best showing was third in 2009. He won the Japanese GP in 2007, but at the rival Toyota owned Fuji Circuit, Hamilton Vettel and Räikkönen all must win, Alonso needs to hold on to third place and Button is a natural for the track.

It’s not over yet!

Next week’s race will be shown live on the big screen at the Green Man.