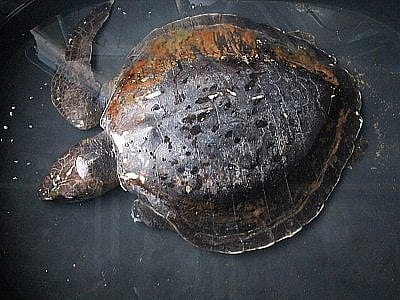 PHUKET: In just one day, half a dozen Olive Ridley sea turtles were rescued in Phuket, all suffering lacerations caused by fishing nets, and a young dolphin was stranded on Mai Khao Beach.

Later, the center received another report telling them that three more turtles had washed ashore in separate locations along the coastline from Mai Khao to Phang Nga.

Of the three rescued at Karon Beach, Dr Kongkiat said, “They were all female Olive Ridley sea turtles, their shells measuring about 50-60 centimeters long.

“We brought them back to the center for examination and treatment as they were all suffering from cuts to their flippers.”

In addition to damaged flippers, examinations revealed that their shells were in poor condition, exhibiting bacterial or fungal growth. From that, ESU staff assessed that the three turtles were caught in fishing nets for about a month.

“We received a report from villagers that one sea turtle washed up on Tah Chat Chai Beach in Mai Khao. A second and third turtle were reported ashore in Phang Nga province. All three were females and had also been ensnared by finishing nets for about a month,” Dr Kongkiat said.

“They are all undergoing treatment at the center,” he added.

According to Dr Kongkiat, over the past five decades the number of Olive Ridley turtles laying eggs along the western beaches of Phuket and Phang Nga had dropped from somewhere between 500 to 1,000 to only about 10 to 30.

PMBC Officers believe that having turtles washing ashore in numbers is a good sign that many more turtles are out at sea trying to get to the beaches in order to lay their eggs.

“I hope a lot more Olive Ridley sea turtles can avoid the fishing nets and other dangers and make it to the beaches safely to lay their eggs,” he added.

Notwithstanding the six turtles they had to deal with yesterday, ESU staff also recovered a young female dolphin that had beached in Mai Khao.

Identified as a Spinner dolphin, Dr Kongkiat estimated that the marine animal is around one year old, a meter in length and weighing about 20 kilograms.

“The dolphin is still able to swim unaided but her balance is not very good. We believe she has an internal infection,” he said.

“Spinner dolphins in the Andaman Sea usually live in schools of about 20 to 100. Sometimes they are found living with other species of dolphins,” Dr Kongkiat explained.

Asked about the cause of dolphin strandings, Dr Kongkiat replied that the monsoon season, which brought with it rough seas and strong waves, was most likely the cause.

Work on Phuket’s B600mn underpass to begin after October 9