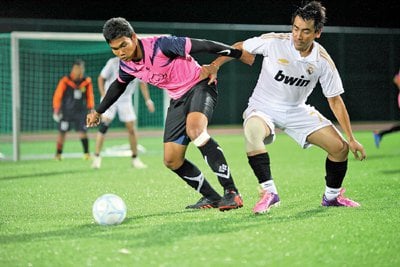 PHUKET: Round two of the Phuket Adult Futsal League season nine, presented by Thanachart Bank, played out under the floodlights of Thanyapura Sports and Leisure Club’s (TSLC) full-sized synthetic pitch on January 26.

First on the Premier Division pitch were Jitjongrut opening their campaign against Portrait FC. Fast flowing and attacking football from Portrait resulted in a commanding 5-1 lead going into half-time. Despite a strong comeback from Jitjongrut after the break, Portrait eventually took the win and the points with a 6-3 scoreline.

Honda Phuket and Thanachart Bank took to the pitch next. Honda started well and took a 2-0 lead into the second-half, but couldn’t continue their scoring form and also conceded three goals without reply, which saw Thanachart win 3-2.

On the first division pitch, SGS got their season off to a poor start going down 2-0 to an as-yet undefeated Ultraman side. With both goals coming late in the first half, SGS pressed to get back into the game, but a well organized Ultraman defence held firm for a 2-0 victory.

The final match of the evening saw Island Boys up against TSLC. The home team got off to a flying start scoring in the second minute. Island Boys regrouped and played good football but were unable to find the net. In the final two minutes of the half, TSLC capitalized on some lapse defending and scored twice for a 3-0 lead.

TSLC then scored from their first attack of the second half and the game was all but over as a contest. Two more goals later in the period gave TSLC the points with a 6-0 win.