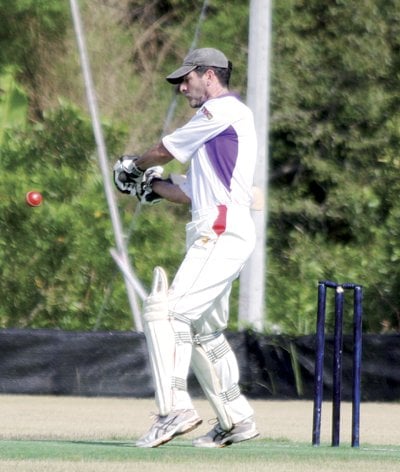 PHUKET: Last season’s 35 Over Champions Patong CC were in an ‘all or nothing’ situation last Sunday for their Island Furniture League encounter against the Thanyapura Tigers at the ACG, knowing that not only it was necessary to win, but that securing all available bonus points would also be crucial to keeping their title aspirations alive.

Patong’s early arrival to the ground and vigorous warm-up certainly identified them as more focused and determined than their opponents. And although their preparations were dynamic, by game’s end it was Patong’s greater experience that helped engineer a devastating victory in scoring a total of 251 runs from 40 overs. Tigers, utterly overwhelmed by the occasion, were bowled out for just 80 runs.

Patong won the toss and elected to bat first hoping to set a big total. But a weak start was manifested by the early loss of opener Richard Desmond (0) and soon followed by Danny Hyams (10). Fellow opener and one of the season’s most consistent batsmen, Seemant Raju (51), took control and along with team mate Dave Thomas (31), the pair put on a 70 run partnership, taking the score to 99 runs. Raju returned to the pavilion after a loose shot from a loose Burger Marx delivery deflected the ball on to his stumps, but the scoring damage had been done.

Anthony Van Blerk (16) and Thomas then put on a 42 run partnership before Van Blerk fell to a Garry Carrick catch. It was time for Patong’s lower order batsmen to shine. And shine they did by putting on 95 runs in the last 10 overs, including Richard Folds (23 from 14 balls), Dean Noble (14 from 13 balls) and an impressive number 11 knock by Kishor Jhagta (36 from 19 balls) to end their innings at 251 for 9 after 40 overs. Barrie Buck’s 4 for 25 and Paul Lattimore’s 2 for 32 were the only distinctions in an otherwise tired Tigers’ attack.

It didn’t take long for Patong to wound the Tiger’s batting lineup when Marx (9) was trapped lbw in the fifth over with the score on 24. Sid Prabhu (18) was the only Tigers’ batsmen who reached double figures in the session as they collapsed to 39 for 5 going into the 10th over drink’s break.

Revitalized, Tigers managed to prevent further embarassment with Paul Lattimore (13) reaching double figures and only two more wickets falling. At the 20 over mark, Tigers were seven wickets down for 71.

While Tigers’ heads drooped, Patong came out focused on their quarry of wrapping up the tail and claiming the full compliment of bonus points. This they did dismissing the Tigers’ remaining batsmen by the 24th over for a total of 80 runs. Manish Sadarangani (4 for 24) and Anil Rawat (2 for 26) were Patong’s outstanding bowlers, while Man of the Match was awarded to Raju.After the game Patong’s captain Richard Folds expressed his thoughts on the game and his team’s position in the league.

“It was a disciplined team performance with everybody playing their part. Jhagta’s late 36 not out was very important as far as securing the bonus points were concerned. As such there is still a realistic chance for [Patong] to make the final,” said the normally reserved skipper. Next weekend’s fixture sees Laguna CC take on Liquid Lounge Lizards in another must win game for both teams.