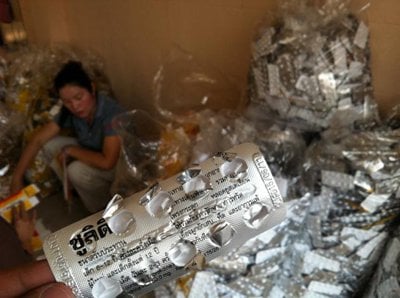 PHUKET: At least one very powerful figure has been implicated in the embezzlement of pills containing pseudoephedrine from state hospitals, the public health minister’s adviser, Pasit Sakdanarong, said yesterday.

An investigation has revealed that about 45 million pills containing pseudoephedrine have disappeared from various hospitals over recent years.

The Department of Special Investigation (DSI) has taken over the case from the police. There is suspicion that the embezzlement is linked to the large-scale production of illicit methamphetamine.

During an interview with a television station, Pasit said yesterday that “a very powerful figure” had allegedly pocketed a ‘5-per-cent profit’ from the embezzled pills.

He did not identify the person, though.

An informed source has given the initials of two persons, P and N, each of whom allegedly received 10 per cent for the pills stolen from state hospitals. It also said Bro Khow got a 2-per-cent share while a “powerful figure” received a 5-per-cent share.

Pasit said the investigation, which is continuing, had uncovered increasingly solid evidence against those involved.

“The investigation will nail down the culprits,” he said.

The DSI has targeted 22 hospitals in various provinces, including Bangkok, in the probe over the alleged transfer of the pills to drug traffickers.

Pasit said pseudoephedrine – an ingredient in many cold pills – could be used to produce illicit drugs.

“It has now been included as a Type 2 narcotic,” he said.

From now on, tablets containing pseudoephedrine will likely be used at hospitals only, Pasit said.

The Phuket Gazette contacted the DSI and was informed by Pol Lt-Colonel Pong-in Inthornkhao, who heads the DSI Bureau of Security Crime, that they could not give any of the names of the 22 suspected hospitals currently being investigated, as it may undermine the probe and damage their reputations even if innocent of any wrongdoing.

Phuket Gazette / The Nation
PHUKET: A television news reporter today vowed to sue a red-shirt leader for intimidation after the public prosecutors decided not to try the case.

Somjit Nawakruasunthorn of Channel 7 said she wanted to prove wrong a theory on the victor’s justice after the public prosecutors dropped charges against Pornthip Paksanont, local leader of the red shirts from Phetchaburi.

“I have no personal grudges but I want to set an example that a wrongdoer should be punished and not rewarded,” she said in reference to the red shirts sharing the spoils of the election victory and getting away from the claws of the law.

Somjit filed a police complaint last year charging Pornthip for threatening her in the wake of her posing tough questions on Prime Minister Yingluck Shinawatra.

The red shirts saw Somjit as being hostile to the prime minister and Pornthip sent 47 e-mail messages to her fellow red shirts asking them to “return the favor” to the reporter.

Somjit said the e-mails could be construed as a threat designed to intimidate her in the line of duty.

Yesterday Dusit Police, in charge of the complaint, notified her of the prosecution’s decision to drop the case.

In the prosecution review, the alleged intimidation in question fell under Article 392 of the Criminal Code. Under the provision, an offense happens after the intimidating message has been conveyed to the victim.

But in this case, Pornthip circulated her message among “friends” on her contact list and did not intend for the victim to read it. By chance Somjit came across the message which led her to identify the sender as Pornthip.

The discovery of the message can be construed as a preparation stage and not the actual act of intimidation as per Article 392; therefore, there is no merit to try the case, the prosecution review said.

Somjit said she would initiate her court battle as an individual case without the state’s involvement.

She said she disagreed with the legal interpretation made by the public prosecutors. The reasoning was absurd because the citing of Article 392 means she must get hurt or killed in order to prove intimidation, she said.

Phuket Gazette / The Nation
PHUKET: The Department of Special Investigation is expected before Songkran to conclude its report on an alleged conspiracy to topple the monarchy, recommending the case be dropped for lack of evidence.

“Evidence is unclear and insufficient to identify culprits,” DSI deputy director general Pravesana Mulpramook said on Friday, in reference to the case known in Thai as “lom chao” plot.

Pravesana was speaking after a meeting with a legal adviser of the Center for the Resolution of the Emergency Situation (CRES), which initiated the legal proceedings in 2010 coinciding with the political disturbances involving the red shirts.

At the meeting, CRES advisor Colonel Wijarn Jodtaeng submitted a box of documents and eight compact disks which he said were additional evidence on the conspiracy.

Pravesana said, however, the evidence was nothing new and shed no light on the conspirators involved in the plot.