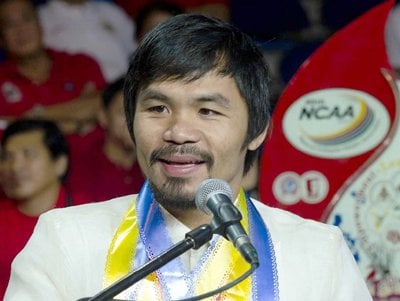 PHUKET: Emmanuel “Manny” Pacquiao (54-4-2, 38 KOs) is expected to sign a contract tomorrow agreeing to take on Thailand’s most famous fighter, Sombat Banchamek, commonly known as Buakaw, in a special fight planned for December 21.

Narong Hengtrakul, one of Thailand’s most renowned international matchmakers for both conventional boxing and Muay Thai fights, will meet Pacquiao in Manila tomorrow to finalize the contract and put down a deposit.

Narong is reported to be close to the “Pacman” (54-4-2, 38 KOs), and has even assisted Manny’s campaign efforts for Congress in the Philippines.

According to local Thai media reports, the Thai promoter has proposed a split where Manny gets 150 million baht and Buakaw gets five million baht.

Buakaw (205-21-12, 53 KOs) may have agreed to the fight, which won’t allow him to use traditional Muay Thai, in light of financial concerns.

Due to a recent breach of contract scandal with his former trainers at Por Pramuk Gym, Buakaw has been forced into early retirement from the sport of Muay Thai by the Sports Authority of Thailand (SAT).

If all goes to plan, the fight will take place at Bangkok’s Royal Plaza in the Dusit District on December 21, shortly after Manny Pacquiao’s birthday.