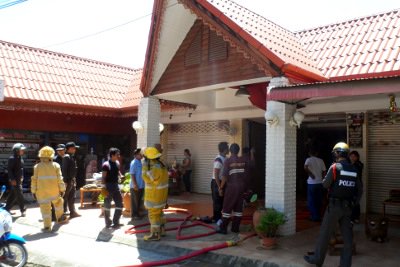 PHUKET: An in-store CCTV system monitor is believed to have started a fire at an antiques and souvenir shop in the Phuket tourist area of Kata, destroying goods valued at more than half a million baht.

Chalong Police duty officer Chianchai Duangsuwan was informed that a fire had broken out at the Sawasdee shop on Taina Road at 10:45am on Tuesday.

Firefighters from the Karon Municipality Fire Department rushed to the store and managed to extinguish the blaze within 10 minutes.

Damaged caused by the fire was estimated at more than 500,000 baht.

Following questioning, the 47-year-old shop-owner Ms Natthanaree Poungmalai, police believe the fire started from a television being used as a monitor for the store’s CCTV system and which was left on 24 hours a day.