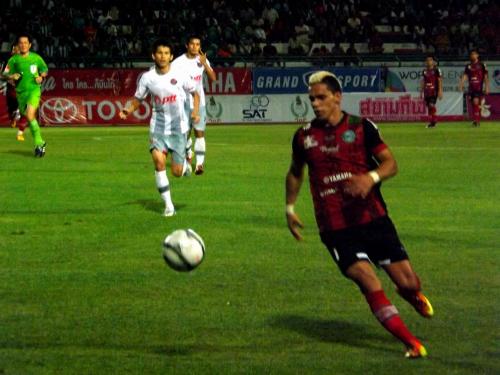 Played in front of about 4,700 fans at Phuket’s Surakul Stadium, the cup match between the two Yamaha One League (YL1) teams yielded the same score-line the last time these two sides met last year.

The match’s only goal was scored by Rayong’s speedy Ivorian striker, Amadou Ouattara, who came off the bench in the second half.

“I wasn’t expecting to play today, but it worked out good for us in the end,” a euphoric Amadou told the Phuket Gazette after the match.

Both sides enjoyed a number of chances, and despite the visitors advancing, the home team’s Brazilian star striker Luiz ‘Dudu’ Eduardo was honored “Man of the Match”.

Dudu, who had more scoring chances than anyone else, commented: “Even though I was awarded Man of the Match, I’m quite sad… It was our side who attacked more and had more chances tonight. I want to say sorry to all the fans, and that now we will really focus hard on getting promoted to the Thai Premier League.”

Phuket FC Head Coach Paniphon Kerdyaem remarked: “The result is regrettable as we missed out on several scoring chances. They [PTT Rayong] deserve credit as they were a strong team and we were unable to beat them this time.

“I also want to give praise to our players. We made a mistake and let our guard down in extra time, but other than that, did our best.”

On the more cheerful end of the pitch, PTT Rayong Head Coach Noppaporn Eksatra said: “We were underdogs. Our team was not in the best form today. Phuket FC came at us with everything, but we had good team spirit. Luck does play a part in football sometimes and today we were lucky.”

Phuket FC will now focus their efforts back on the YL1 2013 season, with their next match on the road next Sunday against TTM (Thai Tobacco Monopoly) Lopburi.

TTM Lopburi were relegated from the TPL last year (as TTM Chiang Mai).

The match will be played on Sunday, March 31. Although initially set to take place in Lopburi (at 4pm), the Gazette has learned that the game has been switched to a pitch located off of Khlong 6, just north of Bangkok in Rangsit, Pathum Thani province.

Greenpeace goes over the edge to protest Krabi coal plant