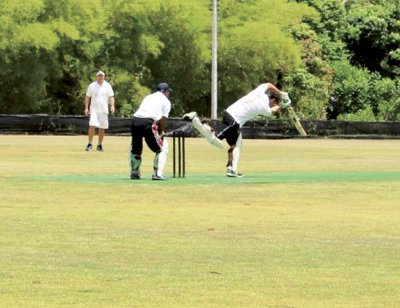 PHUKET: Defending T20 champions Laguna took on the Village in the Outrigger T20 league on Sunday, August 5 at Phuket’s ACG.

The Village were hoping to avenge their defeat by Laguna in the final of the Island Furniture League. However, Laguna came out winners once again after setting a target of 152 runs, while the Village could only manage a total of 123 runs from their 20 overs.

Laguna won the toss and elected to bat first, hoping to set a solid total. The Village got off to a promising start with the prized scalp of Neill Culpan (11) in the second over.

Dave Kelleway (12) looked threatening after dispatching two balls in a row to the boundary. However, he was bowled on the very next ball in the 4th over with the score on 30. Raj Raymaji (3) then joined opener Darren Shaw (48 not out) at the crease and the Village managed to contain the run rate with Raymaji dismissed in the 7th over with the total on 41 runs.

Laguna captain, Stuart Reading (45) then joined Shaw at the crease and they put on a 67 run partnership. Reading was particularly ruthless dispatching loose balls to the boundary. He was eventually dismissed after top edging a leg-side ball in the 15th over with 108 runs on the scoreboard.

The Village once again managed to contain the Laguna lads during the latter part of their innings with limited boundaries being conceded during the last 5 overs. At the end of 20 overs, Laguna had reached 151 runs for the loss of 4 wickets. Pick of the bowlers for the Village were Craig Patterson (2 for 17) and Craig Murphy (1 for 29).

The Village’s innings got off to a slow start as openers Martin Foster (5) and Village captain, Kevin Quilty (6), faced a pace attack from Neill Culpan and Sami Ullah. The bowlers had to wait until the 4th over to get a breakthrough, when Ullah shattered Quilty’s stumps.

Foster suffered the same fate at the hands of Culpan in the next over. Mark Ashman (16) was next to the crease and hoping to replicate his recent form displayed against ICC when he top scored. He proved attack was the best form of defense once again which included a towering six scattering the patrons in the clubhouse.

However, he also had his stumps rattled in the 10th over with the score on 53 and 4 wickets down.

Tomorrow’s game at the ACG will see another double-header with Patong vs the Village in match 1 and ICC vs Laguna in match 2.