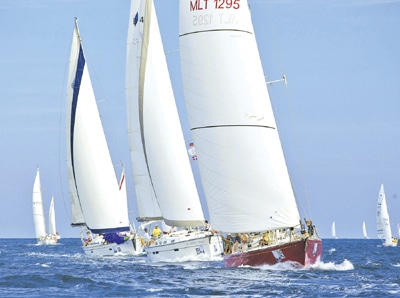 PHUKET: Recognized throughout the eastern hemisphere as the premier sailing event of its kind, the Phuket King’s Cup Regatta will once more put on a spectacular display of the finest sailing talent from around the world from December 1 to 8, 2012.

In addition, the Regatta’s gravitas in attracting sailors from over 35 countries, and some of the fastest racing vessels in the region, the Phuket King’s Cup Regatta is also an important event for the island in terms of development and commerce.

One of the longest running international sporting events in Phuket, the Regatta generates a great deal of revenue for the local economy, bringing with it sports tourists with disposable incomes and around 40 million baht in tourism receipts, according to a survey by the organizers.

It serves to the great benefit of Phuket’s hotels and restaurants, which enjoy a surge of customers before, during and after the regatta.

The economic contribution of the event is likely to be in the region of 300 million, when travel, excursions and repeat visits during the year are factored in.

The event is strongly supported by local authorities and Phuket Province, who work together with event organizers to make the Regatta an annual success for everyone on the Island.

This year’s regatta will also see windsurfing reintroduced as a competitive class, and will feature some of Thailand’s most famous windsurfing stars, including Ek Boonsawad, and Siriporn “Dao” Kaewduanggam. Ek recently represented Thailand at the 2012 London Olympics, while Dao won the 2010 Youth Olympics in Singapore. Up to 40 windsurfers will compete, including the Ladies 2012 Olympic Gold Medalist Marina Alabau Neira from Spain.

The Phuket King’s Cup Regatta 2012 will also feature dinghy racing as part of its roster of international events.

The reputation of Thailand as a sailing nation continues to grow strongly with the Phuket Dinghy Series functioning as an essential proving ground for competitors wishing to progress to full-scale cruisers and racing boats. Windsurfers and dinghies compete for four days (December 2nd – 5th ) while keelboats and multihulls compete over five days (3rd – 8th December, with December 6th a rest day).

Kevin Whitcraft, President of the Phuket King’s Cup Regatta Organizing Committee, spoke of the role this classic race plays in the development of Thailand as a sailing nation and sailing destination:

“We are very proud that the Phuket King’s Cup Regatta is able to take a regional role in contributing to the growth of the Thai sailing community and the yachting industry in Thailand, reinforcing its position as one of the world’s premier sailing destinations. It serves as an inspiration for new and improving Thai sailors, giving them a superb opportunity to experience international competition. From a wider perspective, it is hugely beneficial for Phuket, a part of Thailand famed for its beautiful surroundings, legendary hospitality and suitability for hosting Asia’s ultimate regatta.”

The Phuket King’s Cup is also famed for its series of legendary beach-side parties, attracting over 1,500 party-goers who enjoy the live music, great atmosphere and food and drink provided by the regatta’s sponsors.

Already famous for its stunning views of Kata Beach and its immediate beach access, the resort becomes more special during regatta week as the view from the water’s edge is even more spectacular with the boats moored offshore. We are proud to enjoy our close association with such a magnificent race.”

As a principal fixture on the Asian Yachting Circuit, the Phuket King’s Cup Regatta,
under Royal Patronage, annually features upwards of 100 boats, ranging from high-tech to live-aboard ocean cruisers, multihulls and classics.