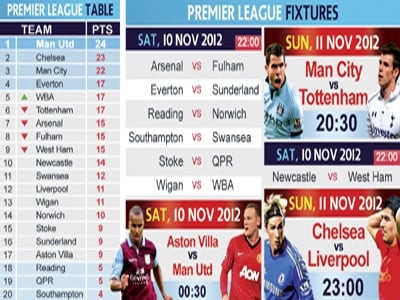 PHUKET: Robin Van Persie scored his 10th league goal of the season against his former team, Arsenal, to help send Manchester United on their way to a comfortable 2-1 win.

On this showing, Arsenal have a long way to go if they want to be taken seriously as title contenders.

The sending off of Jack Wilshere for two yellow cards didn’t help Arsenal’s cause, but even before Wilshere was dismissed, Manchester United were 2-0 up and Wayne Rooney had missed a penalty. Santi Carzola scored Arsenal’s goal with the last kick of the game.

Manchester City maintained their unbeaten start to the season but dropped two points behind league leaders Manchester United, with a goalless draw against West Ham.

City failed to score for the first time since April and Roberto Mancini is starting to act like a manager who is feeling the pressure, as speculation continues to mount linking Pep Guardiola with Mancini’s job. West Ham continue to punch above their weight and ride high in 8th place.

Liverpool’s possession football is still not setting the Premier League on fire, but the club have now gone five games undefeated. Luis Suarez has scored seven of Liverpool’s 13 goals this season and the Uruguayan was in the thick of it again last weekend.

He scored Liverpool’s equalizer to cancel out Yohan Cabaye’s earlier effort for Newcastle, and Colocconi was sent off for a dangerous foul on Suarez.

Swansea scored a late equalizer to earn a well deserved point and keep Chelsea off the top of the table.

Manchester United travel to Villa Park for the late kickoff on Saturday.

Aston Villa are currently joint 4th bottom but victory over Sunderland last weekend and reaching the quarter finals of the League Cup will give the team a much needed lift. Manchester United have beaten Chelsea and Arsenal in their last two league games, so fans will be expecting a victory from this weekend’s match.

Manchester City play 6th place Tottenham in the first game on Sunday. Andre Villa-Boas’ team lost at home to Wigan last weekend and the young Portuguese manager still comes in for criticism from certain fans. Villa Boas has promised the fans that his team will not produce a repeat of the performance against Wigan when they face Manchester City.

Liverpool travel to Chelsea in the late game.