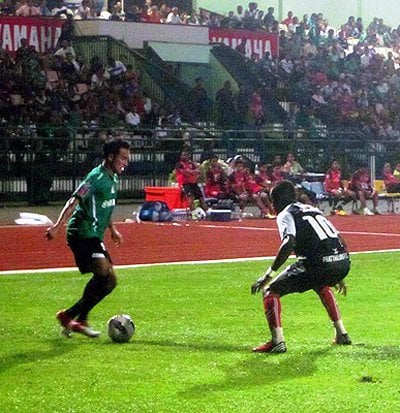 PHUKET: The Islanders moved up one place into eleventh in the 18-team Thai Yamaha One league thanks to a 1-1 home draw last night with southern rivals Pattalung FC.

Both sides, facing the threat of falling into the relegation zone, were hungry for points in the tense, high-stakes match that saw a new record for attendance this season set at Phuket FC’s Surakul Stadium with 4,118 watching the match.

The Swiftlet’s keeper, Walut Makemusik, was in his element however, and coordinated well with his defenders, Nigerian Goodluck Cliff and Pattalung Captain, Anuwat Jun-don.

The score was 0-0 at halftime.

Similar to the two side’s meeting back in May, it was Pattalung who opened the scoring, just after the restart of the second half.

Phuket FC’c equaliser came on 64 minutes from a free kick taken outside the box by Watcharakorn “Bird” Klaithin.

Bird’s shot appeared to have received some help from a Pattalung defender, but nonetheless he was credited his fifth of the season making him the leading scorer for the Islanders.

From that point on, the possession and set play opportunities were evenly weighted, though Phuket almost found a winner from another free kick late in the game.

Team captain, Nonthapan, who prior to kickoff had been awarded by the Thai Premier League the Player of the Month award for August, looked to put one of his deadly, signature strikes into the back of the net, but the shot drift just wide of right-hand post.

With the final score 1-1, both sides moved up one place in the table, inching away from the five team relegation zone.

Pattalung’s next match will be at home next Saturday against league leaders, Ratchaburi.

Meanwhile Phuket FC will hit the road, next up against 10th place Gulf Saraburi FC this Sunday, an away fixture to be played at Saraburi’s PPAO (OrBorJor) Stadium.

In the two side’s first meeting this season, the Saraburi “Warlords” prevailed 0-1 in Phuket.

Last season Saraburi egded Phuket with a win and a draw. The Islanders will look to grab at least a point to continue their march to safety.

Kickoff is set for 6pm.