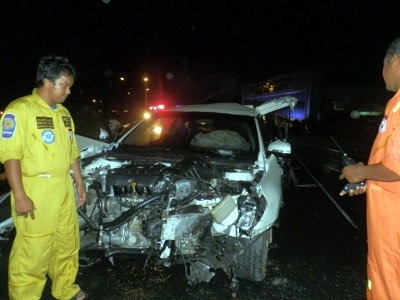 PHUKET: Thalang Police are urging motorists to exercise caution while driving in Phuket during the current spate of heavy thundershowers that has plagued the island for the past week.

“Please drive with caution in the rain. Thalang Police received reports of road accidents every day this week, day and night,” he said.

“Thepkrasattri Road is the main road on and off the island and many cars pass through our area at high speed, but if you want to avoid an accident, drive carefully and follow the traffic regulations,” Col Witoon added.

The call for safe driving comes after one man escaped from a serious accident with only minor injuries late last night after his car skidded in the rain and slammed into the median strip on Thepkrasattri Road.

Lt Col Watcharin Jiratthikanwiwat of the Thalang Police received the report of the accident at 11:30pm.

At the scene, before Mae Ju u-turn near Baan Muang Mai market on Thepkrasattri Road northbound, Col Watcharin and volunteer rescue workers from the Kusoldharm Foundation arrived to find a badly damaged white Nissan Teana in the middle of the road.

“The driver, 30-year-old Pornnarong Jumpathong, said he lost control of the vehicle because the road was slippery, causing him to hit median strip,” Lt Col Watcharin said.

“He suffered a wound to his right foot and cuts to his right upper arm. He was lucky he was not more seriously injured. His arm was cut by pieces of glass and his foot was probably cut by the brake or accelerator pedals,” he added.

Mr Pornnarong was taken to Thalang Hospital for treatment and to confirm his injuries were not more serious than first suspected.

The slipperier-than-usual roads are likely to continue until Tuesday, according to the latest forecast by the Thai Meteorological Department (TMD).

“People should beware severe [weather] conditions during September 15-18,” said the warning, which foretold of “heavy to very heavy rain over Thailand”.

“The ridge of high pressure extends from the upper portion of Thailand affecting the monsoon trough across the Central and the East to a low pressure cell in middle of the South China Sea. The strong southwest monsoon prevails over the Andaman Sea, and the Gulf of Thailand.

“More rain is likely over the country with heavy to very heavy rain in the lower North, Central, East and the upper South. The waves in Andaman Sea and the upper Gulf of Thailand are expected [to be] about two meters high. All ships should proceed with caution,” the warning read.