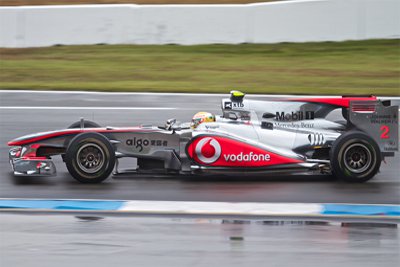 PHUKET: The media has been inundated with stories of Lewis Hamilton leaving McLaren lately. Could it be true? He could go to Red Bull or Ferrari to get a good drive, but then he would be no 2 to Sebastian Vettel or Fernando Alonso – that is not going to happen.

He could go to Mercedes or Lotus (predicated on MichaelSchumacher retiring or Kimi Räikkönen being really tiresome), but Lotus cannot afford him, and Mercedes, who would love to have him, needs 2 or 3 years of development to get Hamilton a win.

This looks like hype in Hamilton’s contract negotiations with McLaren. I would be surprised as well as disappointed if Hamilton was driving for Mercedes and not McLaren next season.

Monza was wonderful for Hamilton – he needed a win. It was good for McLaren, now only 29 points adrift of Red Bull in the Constructors’ Championship. If only Jenson Button had not retired with a ridiculous fault, it would have been a lot less.

It was great for Sergio Perez who came second for Sauber. It was great for Alonso who increased his lead over second place in the Drivers’ Championship and for Räikkönen who moved up to third.

Both Red Bulls retired; Monza was a disaster for them.

Alonso now has 179 points in the championship, but Hamilton Vettel and Räikkönen are all less than 40 points behind.

It’s Singapore next on September 23, where Alonso, Hamilton and Vettel have all won previously. Alonso, of course, wants to win to extend his lead.

Hamilton Räikkönen and Vettel must beat Alonso to keep eroding that lead; any of them can win the championship if they keep winning races, even if Alonso keeps coming second.

Hamilton is in the best position to do that. Webber also has a chance, but Red Bull will do anything to gain a Vettel Championship, so I doubt that Webber will succeed.

It is hard to believe that Button, who is 78 points behind Alonso, can catch up unless Alonso has disasters.

So Singapore is a big race and a circuit where Ferrari, Lotus and Red Bull will not be disadvantaged like they were in the previous two races. It should be a scorcher.

This article would not be complete without mentioning Alex Zanardi. He commenced his F1 career with Jordan in 1991, went to Lotus for 1993 and won his first F1 point at the Brazilian GP.

That season ended with a terrible crash during practice for the Belgian GP. He missed the beginning of the next season and returned in the Spanish GP, but Lotus folded.

He raced in other series until Williams contracted him in 1998. Then in 2001, he suffered a violent Cart accident at Lausitzring. Zanardi, lost both legs in the impact and nearly three-quarters of his blood. Further portions of his legs were amputated during three hours of surgery. It was the end of his career.

Zanardi designed and built his own legs, and in 2004, he returned to racing, driving in the FIA European Touring Car Championship.

In 2005, he won his first world series race since his accident. He retired in 2009. On September 5, 2012, at the Paralympic Games in London, Zanardi won gold in the men’s road time trial finishing 27.14 seconds ahead of Nobert Mosandi. Time to celebrate a hero.