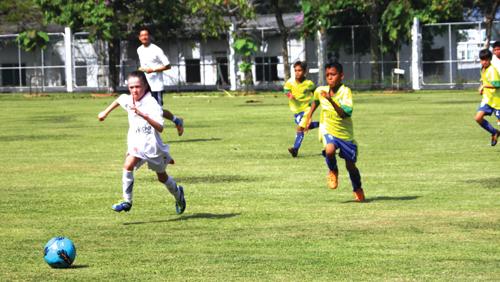 PHUKET: The penultimate round of matches in the 2013 Fair Play League were held last weekend at Phuket’s British International School.

The Under-11s started proceedings with a strong Brazil side proving too strong for a weakened England in the opening game, confidently winning 9-3 and picking up two bonus points for conceding zero fouls.

At the same time, the top two, Spain and Thailand, competed in a highly anticipated match up. With both teams vying for the top spot, the game was tight and finished 1-1. Spain edged past Brazil 2-1 and Thailand beat England 6-2 in the second round of matches.

The Under-14 division then took center stage as the six competing teams played two matches each. In a repeat of their opening game, Thailand Green and Argentina played out a thrilling 6-6 draw.

Spain proved too strong for England, winning 8-1 and Brazil managed to hold on to claim 3 points with a 2-1 win over Thailand Blue. After a short break, Thailand Green claimed their first win of the competition with a 5-2 win over England.

Thailand Blue put up a spirited display but two late goals gave Argentina a 3-1 win and Spain managed a 4-2 win over an improving Brazil side.

The league is now set up nicely for this weekend’s action where final places will be decided.