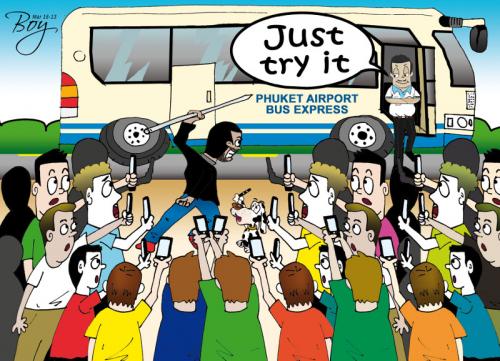 PHUKET: There is only one way that breakthrough projects such as Phuket’s first airport-to-beaches bus service get up and running, and that is if everyone in the community gets behind it and supports it. That means: use it. Get on the bus and go to work, to the beach, to see a friend, a movie or even spend a night on the town – just use it.

The more people who use the buses, the more buses there will be and the cheaper the fares will become. It really is that simple.

At 50 baht each way for an air-conditioned trip between the major beaches, there is no excuse. And no parking hassles when you reach your destination.

The buses are scheduled to start at 9am and continue past midnight each day. This of course means they are of little value for office workers, but Phuket is a tourism destination. Thousands of hospitality staff will be able to use the buses to commute.

It also means far fewer tourists need to risk life and limb on motorbikes to get over the hills between Patong, Karon and Kata. It also means no excuse for drunk driving along the west coast. At 50 baht a journey, those who injure themselves inebriated while the buses are still running only have themselves to blame.

As this issue went to print, the sides of the buses were still blank. Anywhere else in the world, businesses would be queuing up to get their advertisements there with such public exposure.

These new Phuket buses will be seen all the way from the airport to one of the southernmost beaches on the island, and right through the center of Patong, the tourism heart of the island with a catchment area of about 70 per cent of all guest rooms in Phuket. It’s difficult to think of any billboard on the island that offers more exposure.

For Phuket, the real sticking point is the taxi drivers. A Kata-Karon taxi and tuk-tuk driver plainly warned about launching the new buses. “Just try it,” he said.

If everyone uses the buses as people do elsewhere in Thailand, and the world over, these drivers will pick up short-haul travellers of the kind envied by taxi drivers everywhere. Short journey, large percentage gain. This will preserve the drivers’ jobs and alleviate any angst about the new buses. It’s hard to rally a mob when you’re busy making money.

In our desire to support this landmark development, we urge everyone to report any acts of violence or intimidation against this new public service. In this era of citizen journalism, nearly every person on Phuket with a mobile phone can photograph or even video record any event at a moment’s notice. Let us know about any incidents and we will report them to the police.

Whether or not we have cheap, reliable transport the likes of which people enjoy across the globe is really down to us. Get on board. Just try it.