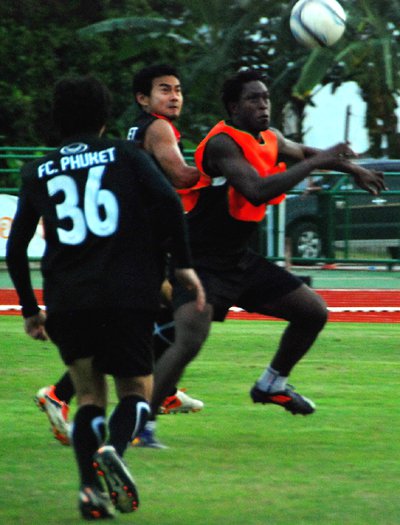 Set for a 6pm kickoff at the Saraburi Provincial Administration Organization stadium, the match follows a 41-day hiatus from league play – a relief period that allowed several footballers, including Phuket’s Sarach Yooyen, to compete in the 26th Southeast Asian Games in Indonesia as well as give players and coaching staff who were affected by flooding an opportunity to tend to their homes and families.

It is because of the floods that Phuket Coach Sompong Wattana will not be heading the team this weekend.

In his place will be Assistant Coach Apichart Mosika. Apichart, a 57-year-old native of Nakhon Sri Thammarat, started training the team on November 18.

Club Secretary Soranun Sanae explained, “Coach Sompong’s house in Bangkok has been flooded and he needs time to take care of this, and has asked his friend, coach Apichart, to help.”

In 2010, Apichart was head coach for Division Two side Rayong FC, and this year has worked on the coaching staff for PTT Rayong in Division One.

Mr Apichart told the Gazette, “Coach Sompong has prepared the team very well. I will help the team to improve their cooperation with each other.”

Mr Apichart was confident about Saturday’s match. “I have some inside info about Saraburi and am quite sure we will win,” he said.

In their last meeting with Saraburi on May 8 at Surakul Stadium, the Warlords beat Phuket 2–0, which gave Phuket’s Southern Sea Kirins their first home loss of the season.

Phuket’s last league match on October 16 was a 1–0 home win over Customs United. FC Phuket have not lost in their last seven league games and are especially confident after beating the Thailand U23 National Side 2–1 in a friendly match on November 3.

Fifth-placed Phuket have four away- and four home-games remaining this season. With 42 points, they trail third-placed – the final promotion seat – Chula United by 14 points.

Phuket jet-skis on the rise