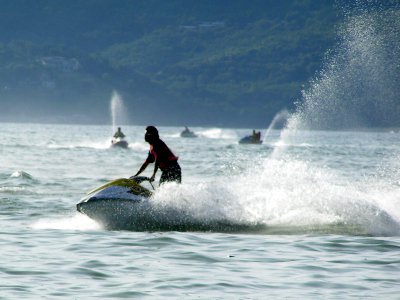 PHUKET: The Phuket Marine Office has decided to take it easy on jet-ski rental operators who haven’t registered their jet-skis, the quarterly meeting of Phuket’s honorary consuls was told at Phuket Provincial Hall yesterday.

“Since we started managing jet-ski rental operations in 2007, we have had 219 jet-skis registered in Phuket. We are still trying to control the number of jet-skis [for rent]. However, we have found 70 jet-skis that are are unregistered,” Phuket Marine Office Chief Phuripat Theerakulpisut told the consuls.

The Marine Office is not planning to take legal action against the offending jet-ski operators, but instead has asked them to cooperate with his office’s efforts, he said.

The 70 jet-skies are planned to be brought into the system and registered under a specially created category with the Phuket Marine Office.

“Also, the jet-skis will be registered for particular zones, which means that jet-skis being rented out in Patong cannot be used in other areas,” he added.

The primary aim of the move is to be able to make sure that all rental jet-skis in Phuket are covered by first-class insurance, said Chief Phuripat.

Previously, jet-skis had to be registered with the Marine Office under the category of cruiser and sports boat.

Under that system, there had been many problems with jet-ski insurance claims, explained Chief Phuripat

“So now we have created a category especially for jet-ski rental businesses. This system has been specifically designed for Phuket,” he said.

“So I would like any tourists who have any disagreements with a jet-ski operator to go to the police. That will make it fair for both sides,” he said.

To support his claim, Mr Cunningham referred to a recent report in the Australian media.

But by April this year, a British tourist was forced to pay 180,000 baht for damages done to a jet-ski at Patong Beach. The tourist was held liable under the waiver the operator required the tourist to sign in order to rent the jet-ski. The rental operator said the insurance coverage was inadequate.

Also in April this year, Ayudhya Insurance representatives told the Phuket Gazette that the jet-ski insurance scheme set up specifically to provide insurance coverage for jet-skis in Phuket was on the verge of collapse because of the staggering number of claims filed by jet-ski operators.