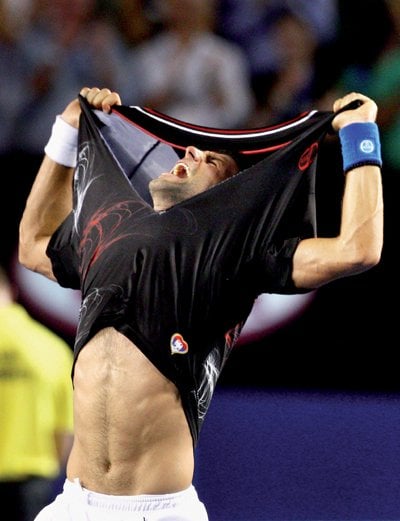 Not only was the encounter the longest-ever Grand Slam final to date, at five hours and 53 minutes, it also gave tennis archivists numerous other records to rewrite.

Nadal is the first man to lose three consecutive Grand Slam finals in the Open era. Djokovic, while consigning the Spaniard to this most unwanted of statistics, gained his hat-trick of titles allowing him to join the hallowed ranks of Andre Agassi, Roger Federer and Mats Wilander.

The Serbian has the chance to emulate Australian Rod Laver by holding all four Grand Slam titles simultaneously in the Open era, when he vies for the French Open in May. If successful, he will also be the first since 1937-38 when Donald Budge won all the titles in a non-calender-year clean sweep.

This was the 29th encounter between the two titans of tennis, but the first match requiring a fifth set.

It was Nadal who looked to have the greatest reserves and focus to take the crown breaking Djokovic’s serve to lead 4-2.

Djokovic paid tribute to Nadal for his part in the battle after collecting the Norman Brookes Challenge Cup and prize money of US$2.3mn. “I had lots of chances to finish the match in the fourth set, but he came up with some incredible serves and incredible points. He deserved to prolong the match in the fifth set, and then really both of us could have won the match,” he said.

Rafael Nadal remained upbeat despite failing to secure his second Australian Open title, acknowledging the match as one of the toughest he had ever participated in.

Nadal added, “We played a nice tennis match. It was a very good show and I enjoyed being a part of it. I wanted to win, but I am happy with how I did.”

Amazingly Nadal found some energy to joke when asked if he would watch the match, saying: “No, it’s too long. Just the highlights.”

In the women’s competition, and after her demolition at the hands of Victoria Azarenka, Maria Sharapova may need another relaxing visit to Phuket.

The Belarusian looked like she might freeze in her first Grand Slam final, with Sharapova breaking her serve at the start to lead 2-0. This was quickly overturned by Azarenka who went on to dominate.

Azarenka gained her maiden Grand Slam title in 88 minutes and secured the World No. 1 ranking.

Azarenka received a replica of the Daphne Akhurst Memorial Cup and prize money of US$2.3mn.