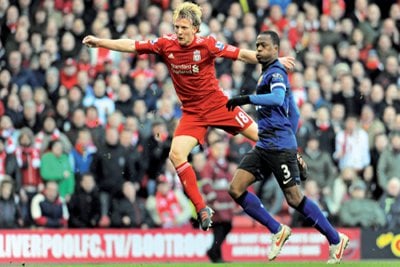 PHUKET: Liverpool FC progressed to the last sixteen of the FA Cup thanks to a late winner from Dirk Kuyt.

In four days the Reds sent both Manchester outfits out of English domestic cup competitions.

Kuyt, left unattended by an absent and constantly jeered Patrice Evra, drove home from inside the United box after Andy Caroll flicked on Pepe Reina’s clearance.

Manchester United’s keeper, David de Gea, had a torrid afternoon despite making a fine save early in the match, diving low to his right to deny Maxi Rodriguez.

The young United keeper, replacing Anders Lindegaard, never looked comfortable in a game that failed to live up to expectations. De Gea’s confidence took a nosedive when he failed to collect Steven Gerrard’s inswinging corner in the 20th minute, allowing Daniel Agger a simple headed goal.

Ji-Sung Park’s well struck shot gave Pepe Reina in the Liverpool goal no chance in the move of the match, after excellent work by Rafael Da Silva on the wing to level the score before the break.

The second half was a dull affair and a replay looked certain until Kuyt’s 88th minute winner.

Newcastle United were the biggest faller of the fourth round losing 1-0 away to Brighton due to an own goal, in a pitiful performance. One Toon fan in Phuket questioned whether they were looking for a win, or just a draw to gain box office receipts back at St James.

Arsenal staged the biggest comeback of the round, winning 3-2 after Aston Villa had taken a two-goal advantage into the break.

Robin van Persie scored twice from the spot with Theo Walcott adding a third in a seven minute spell to send the Gunners through.

No change on a new day: Ruby Tuesday still leads the Bay Regatta