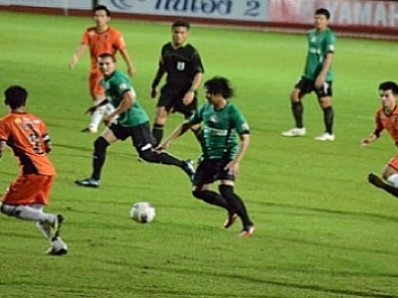 PHUKET: A single goal in the final minutes of the first half was enough for Thai Yamaha 1 runaway league leaders, Ratchaburi FC to prevail over Phuket FC last night.

Played on a damp pitch under overcast skies at Surakul Stadium, the match was one of the first for Phuket FC this season to be broadcast live on national cable (True Visions).

Despite the threat of rain the match still managed to attract 3,570 fans, a new home attendance record for Phuket FC this season.

The previous high of 3,200 was set on May 19 when Phuket hosted Airforce United, a turnout which was matched again on July 7 when Krabi FC were in town.

Standing out from the crowd was a vocal and reasonably-sized contingent of orange and blue shirted away fans who had bused it down from Ratchaburi.

Enjoying strong support, even on their away games, the Dragons were promoted to Division 1 after being crowned Division 2 national champions last year.

The scoreline could have been wider with Ratchaburi dominating possession and having most of the opportunities on goal.

The first real shot came on 10 minutes when Ratchaburi’s leading scorer, Brazilian striker Douglas Gordoza, took a free kick from the edge of the penalty box.

Though on target, the shot went straight through to Phuket’s keeper, local kid, Kampon Phatomakkakul.

Ratchaburi continued to dominate play, but it was looking like a struggling Phuket defense would escape to half time with the scores level.

However, in the second and final minute of added time, Ratchaburi got one last chance before the break with a free kick.

Taken by midfielder Attapong Nooprom from the left side of the box, the shot bounced past Phuket’s keeper and hit the far post.

Gordoza was positioned well to capitalize on the deflected ball, sending it into the back of the net, scoring his 13th of the season.

With the outcome looking hazy for the home team, a stroke of luck looked to work in favor of the Islanders when Ratchaburi midfielder Rattana Phectaporn was given his second yellow card and sent off.

But even with a man advantage, Phuket failed to find an equalizer.

Their best attacking moment all night came on 74 minutes.

Midfielder Jongnok Wattana, who had a surprise start finally shaking off a foot injury, took a free kick near the half-way line, finding the head of Nenebi.

The header hit the cross bar and Niran Panthong had a chance to cash in, but his shot was sailed way over the cross-bar.

Phuket’s Wuttipong Sittitanyakit was given his second yellow late in the game with a dangerous sliding tackle on Ratchaburi’s towering Cameroonian, Bouba Abbo, who had broken through the defense in the minutes of the game.