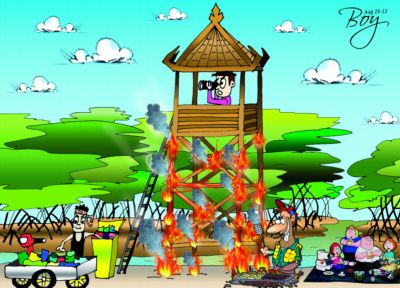 PHUKET: The Tiger Discotheque tragedy on August 17 demonstrates yet again that when it comes to “disaster preparedness” Phuket seems to be battling invisible demons, continually hit in the back of the head by obvious threats we had somehow managed to either ignore or even identify as a possibility.

The latter is of course best exemplified by the 2004 tsunami. Since then, Phuket has been the stage of many highly-publicized tsunami evacuation drills, with Navy helicopters magically appearing off Patong Beach just minutes after the hypothetical “tsunami” is scheduled to arrive, and emergency rescue workers suddenly appearing to whisk mock victims – smiling and covered in ‘blood’ – to the relative safety of Soi Sansabai.

To anyone who has witnessed first-hand these media circuses, along with some of the real tsunami panics that have arisen over the past ten years, the difference between the two could not be more stark.

After the needless deaths of 90 people aboard One-Two-Go flight 269 on September 16, 2007, well-publicized disaster drills at Phuket International Airport have also become regular events.

Indeed, the ‘business of disaster’ has skyrocketed in Thailand over the past decade, with huge government expenditure on safety equipment and infrastructure, including, as just one small example, the shiny new 16-million-baht Department of Disaster Mitigation and Prevention office on Damrong Road.

The Navy has also been getting increasingly involved, using its colossal budget to stage numerous safety drills every year, correctly realizing that our country’s biggest and most imminent security threats lie within our own borders.

Of course it is hard to criticize efforts to keep our various emergency rescue units well-coordinated, highly-trained and “battle-ready”, but as the Tiger Discotheque tragedy reveals, a much more effective approach would be a proactive one: actively seeking out and dealing with obvious threats through enforcement of existing regulations. After all, mitigation is invariably several orders of magnitude more expensive than the costs of prevention.

Sadly, it is the lethal combination of corruption, indifference and complacency – on the part of both officials and the public, who should do a better job of holding the authorities accountable – that allows this dangerous status quo to persist.

It comes as little surprise that the Tiger tragedy has now re-ignited world attention on fire safety at night entertainment venues in Thailand. However, there are far bigger firetraps in Phuket that have been accidents-in-waiting for more than a decade. One of the most obvious is a large retail outlet that appears to have been designed for maximum carnage should a fire ever break out there.

Until glaring threats such as this are addressed, it seems all one can really do is to take as much responsibility as possible for one’s own personal safety – and hope not to become a victim of the next catastrophe.