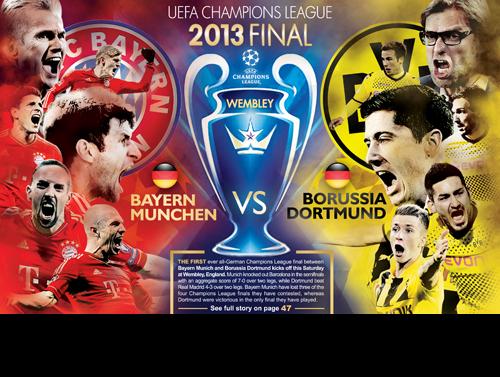 Dortmund midfielder Mario Goetze, who will join Bayern next season, is also racing to recover from a muscle injury in time for the final at Wembley.

Dortmund are looking to win their first Champions League trophy since 1997 with four-time European champions Bayern aiming to make it five in their third final appearance in four seasons after the 2-0 defeat in 2010 to Jose Mourinho’s Inter Milan in Madrid, then the acute disappointment of losing last May’s penalty shoot-out in Munich to Chelsea.

The final kicks off at 01:45am Sunday morning.

Arsenal beat North London rivals Tottenham Hotspur to England’s fourth Champions League spot, their 1-0 victory over Newcastle on the final day of the Premier League season was enough to ensure their place in Europe’s showpiece competition.

In Serie A, AC Milan scored twice in last six minutes to snatch a place in the Champions League qualifying round, while Porto clinched their 27th Portuguese Premier League title.

Chelsea sealed third place on 75 points with a 2-1 win at home to Everton, while champions Manchester United said farewell to retiring manager Alex Ferguson with a 5-5 draw at West Bromwich Albion.

AC Milan scored twice in the last six minutes to beat relegated Siena 2-1 and finish third in Serie A, clinching a place in the Champions League qualifying round.

Champions Juventus completed their campaign with a 3-2 defeat at Sampdoria while Walter Mazzarri announced his resignation as coach of second-placed Napoli, immediately after the 2-1 defeat at AS Roma.

Inter Milan finished their miserable season in ninth after being thrashed 5-2 at home by Udinese, who were fifth and joined Fiorentina in the Europa League.

League runners up Real Madrid lost 2-1 to third-placed Atletico Madrid after extra-time in the King’s Cup final on Friday.

Real Sociedad’s hopes of claiming Spain’s fourth and final Champions League spot remain alive after coming from behind to beat Sevilla 2-1 on Saturday.

With two matches remaining they are tied on 62 points with Valencia, who beat Getafe 1-0, but are ahead in the standings thanks to a superior head-to-head record.

Champions Bayern Munich needed some Franck Ribery magic to end the Bundesliga season with a dramatic 4-3 win at Borussia Moenchengladbach as they prepare to face Borussia Dortmund in the Champions League final this week.

Schalke 04 beat Freiburg 2-1 to grab fourth place and a Champions League qualifying spot, with their opponents settling for the Europa League along with Eintracht Frankfurt.

Islanders look to trek the Elephants after Stallions rein in Phuket