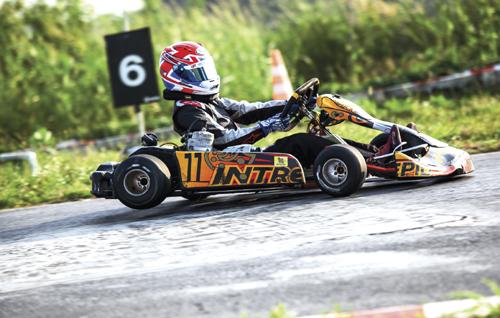 PHUKET: Since the last update by the Phuket Gazette on the progress of Ben and Sam Grimes in their rookie karting race year, the boys have made good progress in the second half of the season.

Clearly their mid-season driver coaching and testing sessions, together with improved fitness levels paid off, and showed just how important investing time and effort outside of race weekends is.

Ben and Sam raced in four events in the last quarter – the final 2 rounds of the Thai Championship, the final round of the Malaysia AMC Championship and finally the annual Krabi Kart Championship

Ben qualified 3rd, 0.5 seconds off pole in Round 5 of the Thai Championship and was reasonably competitive throughout the weekend. He stepped it up significantly in the final round at Saraburi International Circuit with a stunning pole position time of 1 minute 2.004 seconds on the last lap of the qualifying session, out-qualifying several drivers with years of experience in Thailand and around Asia Pacific

In Heat 1, Ben finished 3rd after lots of trouble on the first lap – he dropped to 8th, but fought back to eventually finish 3rd. Unfortunately, Ben then developed carburetor problems in Heat 2, which worsened throughout the day.

Despite being a full four seconds a lap slower in the Final, Ben persevered and doggedly finished the race, a long way last. However, the determination to finish remarkably paid dividends, and after scrutineering, he was promoted to 4th place as a result of karts not finishing, two karts being under-weight and one being disqualified for an engine infraction.

This proved to be vital for Ben, as the points he collected by finishing fourth elevated him to an overall 3rd place podium finish in the overall KF3/Junior Thai Championship.

A fantastic first season effort when you also add in the three podium finishes and a pole position.

Sam’s improvement in speed in the second half of the season was dramatically emphasized in the last two rounds of the Thai Championship, where he qualified on the front row in both Rounds 5 and 6, narrowly missing out on pole position on both occasions to Jakkarin, the stand out Cadet driver of the year, who comfortably won this year’s overall Championship after finishing runner up in last year’s World Mini Rok Championship in Italy.

Sam’s lack of race craft hindered him during both races.

Starting on the outside of the track proved to be his downfall and on both occasions, he got pushed wide and dropped down the order. In R5, Sam was back up to 4th and challenging for a podium finish, when he was hit from behind and spun off the track and in the R6 final, he managed to battle his way back and finish.

The final round of the Asia Max Challenge at Sepang in Malaysia was great experience for both boys as they raced in larger fields against some of the best young drivers in Asia. Racing conditions were tricky, as the track switched between wet, damp and dry conditions.

Sam qualified well in 5th but was plagued with both set up and mechanical problems all weekend.

Ben qualified 23rd after a difficult qualifying session, where he was only able to get in a couple of laps in changing track conditions; Ben had battled his way up to 18th in a very crowded mid field when he was hit by another kart, which forced him to retire with a bent axle.

The boys travelled to Krabi for their final race of the year, with Ben deciding to compete against the adults in the very competitive Krabi Kart Senior Open Championship and Sam stepping up to race in a Junior 125cc KF3 kart for the first time, in the Phuket Open.

Ben was disappointed in qualifying 7th out of 10, due primarily to different tyre pressures in his front tyres, but had a good first race and made up three places to finish 4th in Heat 1. Heat 2 was called off due to terrible weather and he finally finished 4th (on slick tyres) in a very damp Final.

Sam took to racing the larger, faster kart like a duck to water and dominated the weekend, qualifying on pole and then winning Heat 1, Heat 2 and the final, where he raced for the first time in very wet conditions. He only lost the lead once briefly in the Final, but retook it the following lap and never looked back.

Reflecting back on 2012, both boys are extremely pleased with the experience they have garnered and with what they have been able to achieve in their rookie season. At the start of the year, no-one was really expecting any pole positions or wins; the aim was to gain experience, see gradual improvement in technique and results and to generally become more competitive against drivers who have been racing for several years.

2013 will be a busier year with more racing planned. In addition to competing in the Thai Championship again next year, both boys will also compete in the Malaysia AMC Series as well as a couple of Asia Pacific Invitational races. There will be a significant investment in new chassis’ and engines and a tie up with a new team in Malaysia next year and the expectations for 2013 are much higher.

Ben and Sam – as part of a school approved project – have both been busy preparing a business and sponsorship plan to support their racing objectives for 2013 and are actively looking at developing an attractive package and proposition for potential sponsors.