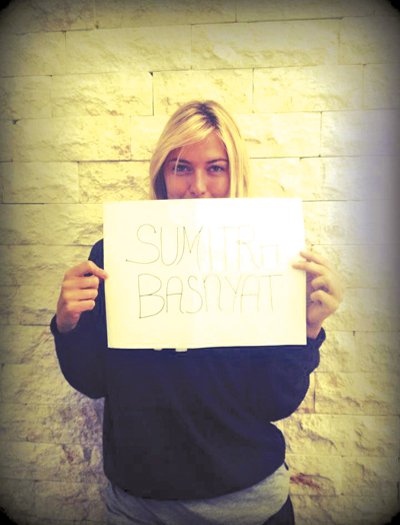 PHUKET: It’s been an eventful few weeks with Sumitra “Dear” Basnyat winning the inaugural Sugarpova contest and playing events in Bahrain and Bangkok.

Sumitra concluded a major change with her equipment sponsor, which means for the next critical phase of her career we will be using and promoting Pacific racquets/grips and strings.

Maria Sharapova launched her Sugarpova candy brand a few months back and each month someone wins free candy. Sumitra was the first winner and she was delighted to have Maria hold up her name.

For this article, I would like to address a common problem, which affects many people (including Sumitra) and causes distress in several areas of their lives.

The effect is commonly known as “choking” and it is a tightening feeling, which results in poor performance and can make people panic when under stressful situations such as: public speaking, interviews, exams and pretty much anything that involves you wanting to perform or make a good impression.

At the start of tournaments, you see many young players practicing well, hitting it hard and looking very strong.

Parents and coaches look pleased and everything seems in place.

Once the event begins, however, it can be like watching different players. They often get caught up in the emotional pressures that come with the knowledge of sacrifices and commitments that have been made for them to be able to play. It can just become too much to cope with.

At the professional level, possibly the most famous “tennis choke” ever was the Novotna v Graf Wimbledon final of 1993. Novotna was 4-1 and 40-30 up in the final set, but her serve simply deserted her; she lost and wept on the Duchess of Kent’s shoulder at the awards presentation.

It was really pleasing to see her win years later in 1998.

And even the great Federer suffered in the Davis Cup semifinal in 2003, losing to Hewitt 6-1 in the 5th after holding a two set lead and a break in the third.

Many top players discuss “choking” in their autobiographies as just something you have to go through as a young player. It’s just that some struggle and take longer to conquer it than others.

Many people think it only affects shy and unconfident people, but this isn’t true. It can affect anyone at anytime, and even confident people, who have taken a knock back, can then be concerned about future scenarios, and that worry could then potentially lead to a ‘choke’ performance.

How to solve the problem?

The four key areas are breathing; visualization; creating a good environment; and to focus on the task in hand.

Regulating your breathing pattern is crucial to controlling emotion and that in turn will help you to keep a clear head when needing to make decisions at critical times.

Visualization, is the process of mentally rehearsing the situation and replacing negative reactions and thoughts with the positive responses you wish to occur.

To create a good environment is key to being able to relax early and having a good experience. Even top athletes and performers sometimes build situations up too high and then can’t control the situation/environment that they themselves have mentally created.

Last but not least, is to focus on the task in hand. The best way of not being affected by past experiences and previous mental baggage, is to just focus on the moment and deal with things instinctively and naturally.

You don’t have to live in the grip of choking, it can be dealt with. You can break free!

Darran can be contacted with questions or comments by email on darranferre@hotmail.com.