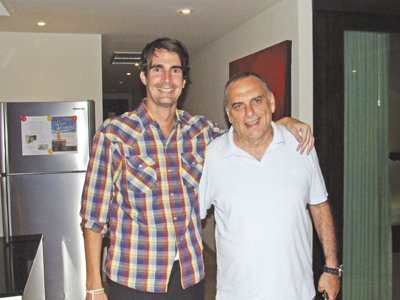 The Israeli took over as manager of Chelsea in 2007 and brought them to the brink of a Champions League final victory, only for a John Terry penalty miss to snatch it away.

He led Portsmouth to the FA Cup final in 2010, the same season they went into administration. He then managed West Ham the season they were relegated and recently helped guide Partizan Belgrade to their fifth successive Serbian Championship before resigning earlier this year.

Phuket Gazette: How did you find the transition from coaching the Israel national team and coaching club teams in Israel prior to coaching Chelsea?
Avram Grant: For me it was not a big surprise. Since the age of 22 I had visited England five times each year and was in Europe to study.

I was Bob Paisley’s guest at Liverpool and I watched training for one week to 10 days – watching games to see how the club was run. Arsene Wenger and Alex Ferguson are friends, so it was not something I didn’t know before.

People only really noticed me when they watched the Israeli national team’s qualification for the 2006 World Cup in Germany, where we didn’t lose a game and missed out on qualification by only two goals.

Who is the best Israeli player you have worked with?
I have worked with many good Israelis, but if I was to choose one it would be Yossi Benayoun who has played for Arsenal, Chelsea and now plays for West Ham. I think he is the most famous one. I started to coach him in 2000 when he was 19-years-old. Then we won the championship with Maccabi Haifi in Israel.

After Israel he moved onto Spain and to England. He is the type of player I believe in because he is also a very nice person.

What makes him so special?
He is very clever and can think a lot quicker than other players with or without the ball. I have to admit I was not so sure he would succeed in England as he is not so physical. He is an intelligent player that can help the dynamic players around him.

Why do you think fewer English players play abroad?
I don’t know if you know the color of the money (laughs)? I think [for] two reasons. First: it is the most exciting league in the world. Stadiums are always full, even if you go to the Championship – the stadiums are always full. A football player is like an actor, he wants to play where everybody will see him. Second: Money.

Players always get paid on time. When I was at Portsmouth the owners didn’t pay on time and this was a big thing in England.

When you took over from Jose Mourinho at Chelsea, was it hard to leave his shadow?
I can tell you that one of my friends sent me a message saying, ‘I don’t know if you know what you are doing to [take over] after Jose Mourinho’. I knew it would be very difficult and that all the world expected I would fail after Mourinho.

As I have done all my life, I took on the challenge and only thought about what was best for the team. It was not easy but it was a big challenge.

Do you think your time at Chelsea was a success?
Some of the players said at the time that they didn’t think any other manager could’ve taken over after Mourinho and carried the team the way that I did. When I first saw them, the team was not good, nor was the atmosphere.

With me they were almost the champions of England. We came down to the last game on the same points as Manchester United, which nobody was expecting when I started, and then the Champions league final. It was a very good season and a good base for Chelsea for the future.

Did you feel hard done by losing your job after the Champions league final?
Yes. When you become a manager you expect everything but football changes… you are [only] as good as your last result. My last result was good and other results were good [but] it was a decision from the owner. I didn’t even ask him why. I moved forward and had good days after that.

What are your views on the John Terry racism case after working with him for so many years?
It is good to fight against racism but I think it went a little bit too far.

John Terry is not a racist. Even though he said a few words he didn’t need to say. But, we are playing football. If we played here five on five, maybe also we would say something that is not so nice. It is good to fight against racism.