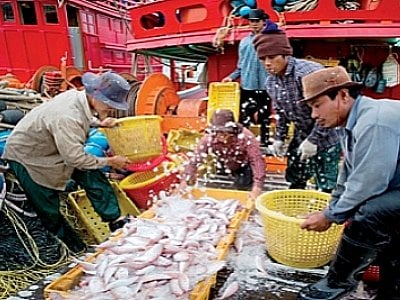 Workers in Thailand’s fishing industry often find themselves living a violent nightmare with no escape in sight and no help. Meanwhile, human rights experts and local organizations look for ways out.


PHUKET: The next time you sit down to a seafood dinner in Phuket, think of Min, a Karen-Burmese migrant worker from Shan State.

Min is one of countless migrant workers who have been trafficked into Thailand as a last resort to earn a living. He didn’t know where he would end up or what kind of work he would do, but he had run out of options in Burma.

He recalls his ordeal in Snap Shot Stories from Invisible Victims of Trafficking in Thailand, a collection of real-life experiences of trafficked workers published last month by the Mahidol Migration Center (MMC) at the Institute for Population and Social Research in Bangkok.

Min was promised 6,000 baht per month as a restaurant or factory worker in Thailand if he could cough up the 12,000-baht “broker fee”. He couldn’t afford it so he agreed to use his future wages to pay it back.

“After walking for days and with swollen feet, Min was taken to a fishing boat. A Mon and a Thai man watched over the workers. The Thai man had a gun and threatened the workers with it. Min had to work hard and when he didn’t, he was kicked in the stomach,” the report states.

It goes on to detail how he lived in cramped conditions and was forced to work day and night – and was never paid for his work.

Min and his shipmates were beaten for stealing a fish and cooking it on the exhaust pipe of the boat. He didn’t know how to escape, since every time they were docked, the workers were taken to a house and locked in a small room.

Once, two workers ran away, but one was caught. “The worker was taken back to the boat and tied to a post with his feet half immersed in water… the man was electrocuted… and tortured with cigarette butts. Later he was taken to the back of the boat and shot through the head,” the MMC report said.

In October, a crew of Burmese fishermen mutinied and killed their Thai captain and Thai engineer in Indonesian waters before being caught off the coast of Phuket. The confessed murderer said he hacked the men to death because he was tired of the constant abuse – physical and mental.

A common theme in the stories of migrant workers – like Min, who tied himself to a life buoy, jumped overboard and swam through the night for six hours before reaching shore – is that they don’t know who to turn to as law enforcement officials are often reported as being involved in the trafficking process.

“Normally, if a laborer is abused by his employer, he has the right to report it directly to the police,” an officer from the Phuket Provincial Office of Social Development and Human Security told the Gazette.

“We are open to reports from anyone, but so far we haven’t heard from any migrant or Thai laborers about forced labor or slavery on fishing boats,” she said.

When asked how such cases could be investigated if the victims fear for their lives, she added, “Our office is open to everyone, especially regarding human security issues. No matter who they are, if they feel that their life is threatened, they can come to us, but we can’t really offer them any help if they refuse to come to us.”

“The laws that we use for local [Thai] and migrant laborers are the same. We require that employers work their employees no more than eight to nine hours per shift, and no more than six straight days. If they are worked over that, they are entitled to overtime compensation,” a Phuket LPWO officer said.

“I haven’t had any reports to our office regarding forced labor or slavery on fishing boats. I’ve heard about it on the news, but we have never received any reports in our office,” she added.

According to experts, the official response to what is believed to be widespread rights abuses in the fishing industry is insufficient.

“Basically, the Phuket Labor Office is taking a ‘see-no-evil, hear-no-evil’ stance, pretending that a serious problem does not exist simply because no one has dropped into their office to tell of an escape from a labor situation or human trafficking issue on a fishing boat,” he said.

According to a recent report by the International Organization for Migration (IOM), “Thailand’s recruitment for workers in the fishing sector remains largely based on informal processes which often lead to abuse and foster human trafficking.”

Conditions on fishing boats are cramped and dangerous, with fishermen expected to work 18 to 20 hours a day, the report said, adding that workers who fail to meet the captain’s expectations face beatings, denial of medical care and maiming or even killing.

“While some Thai government bureaucrats in Phuket are hiding their heads in the sand, reports by United Nations agencies have repeatedly uncovered systematic abuse of trafficked migrant workers on Thai fishing boats.

“There have been repeated cases of the sort [that resulted in the arrest of mutineers in Phuket] – migrant worker crews rising up and overpowering and killing abusive captains. The other side of the story is the many fishermen sent to sea against their will who cannot continue their work and are violently dispatched and thrown overboard,” Robertson said.

According to the IOM report, forced labor is prevalent in the Thai fishing industry, if which the labor force is largely comprised of men from Burma and Cambodia.

“Estimates are hard to come by because many boats are unregistered, Thai officials are uninterested, and trafficked men on the boats who escape are profoundly afraid of raising what happened to them because they fear retaliation by fishing boat owners and captains,” Robertson continued.

The State Enterprise Workers Relations Confederation of Thailand (SERC) is actively involved in promoting the rights of all workers in Thailand.

Through a network of volunteers on the ground, the SERC is well-positioned to field complaints regarding forced labor.

“Sometimes we take some of the cases we have to the government, so they can see what we are dealing with,” SERC General Secretary Sawit Keawan told the Gazette.

“They don’t seem to understand, or they try to ignore the human rights issue – especially the Burmese workers who come to Thailand illegally,” he said.

“The most common report from our volunteers in Southern Thailand involves workers in the fisheries and agriculture industries, [where] most involve forced labor and physical abuse,” Sawit said.

Sawit added that boycotting the seafood industry would cause more harm than good.

“It’s not the most effective way, and it may have a negative effect on migrant workers in other industries. If you want quicker results, you can just report incidents directly to the SERC,” he said.

Meanwhile, the IOM and Human Rights Watch call on the Thai government to put some muscle behind current legislation to crack down on human rights abuses in the industry, and to create an open system of matching prospective employees with employers.

“Thailand is one of the world’s largest exporters of processed seafood. Consumers in North America and Europe should be demanding that the fish importers get involved to make sure their products do not come from forced labor,” Robertson said.