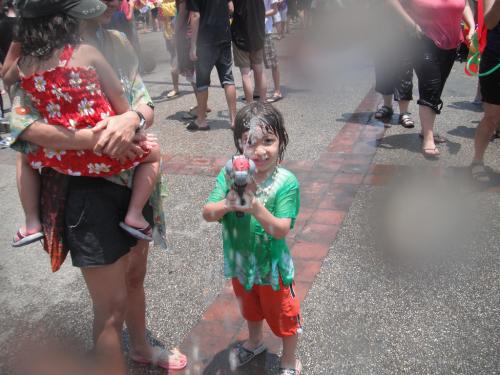 PHUKET: Following the ban on “water battles” in trucks recently announced by Deputy Interior Minister Chat Kuldilok for Songkran celebrations (link here), the Gazette has been informed of possible new restrictions being proposed, given the island’s current drought-like conditions.

Phuket is facing its driest quarter in 10 years with only about 2.9mn cubic meters at the Bang Wad Dam (story here).

Lt Col Naamchai Wannaporn, head of the Phuket Environmental Enforcement (PEE) committee, has said that people need to use less water and smaller pistols or cups instead of bowls and hoses during Songkran. The proposed limit of fresh water permitted in play zones will be one liter per person, per day.

“Anyone possessing or using in excess of one liter of fresh water could be fined 1,000 baht or made to volunteer in picking up trash in klongs around Phuket Town,” he added.

Mr Wannaporn also noted that PEE staff will be patrolling Phuket in an effort to stem the tide of excessive water wastage.

“Those who play Songkran should do it with concern for the local environment and when they have used up their liter of water they can resort to a ‘safe substitute’ such as those listed on PEE’s website.” he said.

A few of the substitutes listed on the site include: sea water, milk, tea, coffee and some household lubricants. Check www.pee-4-me.co.th/eng for a full list.

Another advocate of the drier Songkran plan, Somchai Rattanaporn-sawonkul-wisuwut-na Sanook, a representative of the Wichit Interior Zoning Department (WIZD), agrees that just as much fun can be had using less water.

“Just because you [are] using a small pistol and don’t have much water doesn’t mean you can’t have a memorable holiday,” said Somchai. “Every year I play with my small pistol and have lots of fun,” he continued, noting however, that “It’s over pretty quickly, though.”

Despite these new restrictions, the government is expecting a record number of visitors to the island and urges those who do come to “have a happy, safe and moist holiday”.