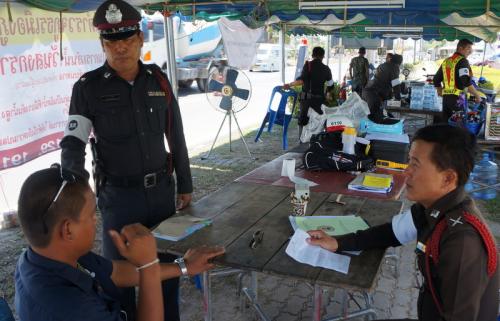 PHUKET: Phuket maintained its zero death toll for Day 3 of the Seven Days of Danger national road-safety campaign for the Songkran Thai new year holiday period, while nationwide the death toll grew to 173.

The Department of Disaster Prevention and Mitigation Phuket office (DDPM-Phuket), which collates all road accident statistics during the campaign, reported nine motorbike accidents, injuring 10 persons, in Phuket for the period midnight Friday through midnight Saturday.

According to the DDPM-Phuket’s records, at 2:50pm on Saturday Kantaong Sangkrajui, 7, was injured in a collision between two motorbikes on Srisuthat Road, between Koh Sireh and Phuket Town.

At 3:25pm, Natthapong Kongderm, 16, from Ranong, was riding a motorbike when he was struck by a car in front of the 7-Eleven on Sakdidet Road, Baan Borrae.

At 11:40pm, Karnjanaporn Srichote, 16, from Utai Thani, was riding a motorbike when she was struck by a car in front of Phuket Villa 3 on Chao Fa East Road.

There were six accidents involving drunk driving, reported as follows:

At 5:45am on Saturday, Sorrawit Sangfahleon, 25, from Lampang, and Narerbast Chaithiangtham, 19, from Phitsanulok, were drunk when they collided with a power pole in front of Muang Thalang School, Thepkrasttri Road (story here).

At 10:15am, Wittawat Kattang, 19, was speeding drunk when he collided with a car on the road from Thepkrasttri Road to British International School – Phuket, in Koh Kaew.

At 10:30am, Peerayuth Kongkaew, 23, from Udon Thani, was drunk when he fell off his motorbike on the curve near the Panta Hotel on Baan Don Road, Cherng Talay.

At 4pm, Hark Lamorh, 53, from Phang Nga, was drunk when he collided with another motorbike near the Irawadee housing estate on the bypass road.

At 5pm, Pradis Vichamon, 23, from Chiang Mai, was drunk when he collided with a pickup truck at the Rang Hill Intersection on Mae Luan Road, Phuket Town.

At 9pm, Tossapon Ongsangkij, 47, was drunk when he collided with a car on Kata Hill.