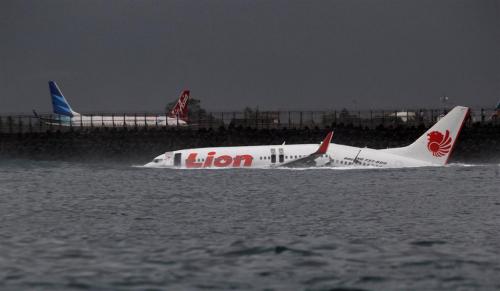 
All passengers safe as Lion Air plane lands in water in Bali
Reuters / Phuket Gazette
PHUKET: All 108 passengers and crew survived when a Lion Air Boeing 737 missed the runway on the Indonesian resort island of Bali on Saturday and landed in shallow water, an airline spokesman and government officials said.

Initial reports said at least 16 people were taken to hospital for injuries and shock but there was no word on whether any were in serious condition.

“The aircraft was from Bandung, West Java, and about to land in Bali Ngurah Rai Airport but it probably failed to reach the runway and fell into the sea,” said Lion Air spokesman Edward Sirait.

He said there were 101 passengers and seven crew on board. Officials said all survived. An official had earlier said 172 passengers were on the plane when is landed in the water at about 3.45 pm (0745 GMT).

“There was no sign at all it would fall but then suddenly it dropped into the water,” passenger Tantri Widiastuti, 60, told Metro TV. “I saw holes in the floor of the plane … we were evacuated quickly.”

She said she had been treated for minor cuts.

Transport Ministry spokesman Bambang Ervan told Reuters the plane landed in the sea before reaching the airport. An investigation is under way.

Indonesia has been struggling to improve its civil air safety after a string of deadly accidents. In 2007, Lion Air was among a number of Indonesian airlines banned by the EU for lax safety standards. The ban was progressively lifted, starting in 2009.

TV footage showed the jet floating with a fractured fuselage and passengers in the water.

According to the Aviation Safety Network, Lion Air planes have been involved in six accidents since 2002, four of them involving Boeing 737s. Only one of them, according to the site, resulted in fatalities.