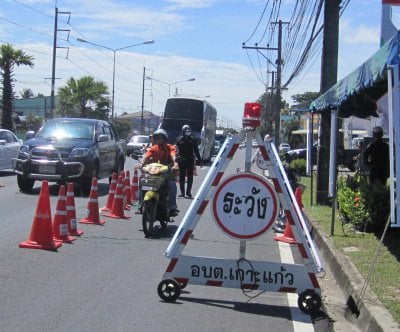 PHUKET: With the Songkran “Seven Days of Danger” road-safety campaign ending at midnight tonight, the road toll for the Thai New Year stands at three people dead and a further 32 admitted to hospital as a result of road incidents.

Witthaya Piraka, 42, died on April 12 when while under the influence of alcohol he drove his motorbike into a wall.

Pairot Wisetsombat, 55, and Lamyong Dujpayak, 45, both died on April 13 when a pickup truck being driven by a drunk driver collided with their motorbike in Pa Khlok.

Statistics released by the Department of Disaster Prevention and Mitigation (DDPM) Phuket office for the period April 11-15 report 33 road accidents during the period. Most of the accidents involved motorbikes and 17 reported alcohol as a major contributing factor.

The DDPM breakdown statistics report the number of traffic offenses as follows:
Riding a motorbike without wearing a helmet – 911 people
Driving without [carrying] a valid driving license – 1,172
Riding an unsafe motorbike – 106
Driver and/or passengers failing to use seat belts – 283
Driving under the influence of alcohol – 23
Failing to stop at a red traffic light – 12
Driving against the traffic direction flow (ghost-riding) – 3
Overtaking in a restricted zone – 2
Using a cell phone while driving – 13