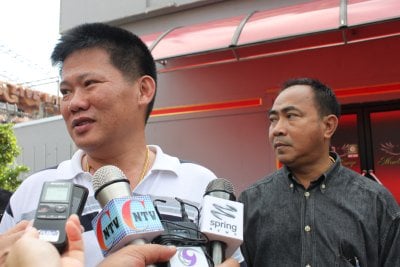 PHUKET: A spokesman for Phuket’s Tiger Group told the media over the weekend that his company is still considering legal action against politician Chuwit Kamolvisit following his allegation that a casino had operated out of one of the company’s venues in Patong.

The threat of legal retribution follows the failure of two police investigations to uncover any wrongdoing at any of the group’s establishments.

MP Chuwit on March 30 claimed several casinos were in operation on the island, the largest and most profitable inside a Tiger Group venue in Patong. However, an inspection of the group’s holdings by Patong Police just hours after the allegations were made on Thai TV Channel 3 turned up nothing.

The second investigation, by the Bangkok – based Anti – Human Trafficking Division (AHTD) of the Royal Thai Police, likewise failed to uncover any evidence of wrongdoing at any of the nightlife venues it has investigated in the seaside town.

Sema Sinchai, assistant managing director for Tiger Group, spoke to the media after two Tiger Group venues, Tiger Live Bar and Tiger Discotheque on Bangla Road,were inspected on April 13 and 14 by AHTD officers dispatched from Bangkok to investigate the claims.

Mr Sema said the allegations tarnished the group’s reputation among potential investors. “We have tried unsuccessfully to get loans from the banks because the allegations made against us don’t look good in the eyes of financial institutions. Luckily, we can prove that that there are not any casinos in our places,” he said.

“Mr Chuwit told the media he had video evidence of gaming taking place at our venues, but thus far he has presented nothing to back up his claims. We don’t know what he is waiting for,” he said.

“When he plays that video,we will prove that it wasn’t one of our venues,” he added.

MP Chuwit was scheduled to join the AHTD officers in Phuket over Songkran, but reportedly canceled his trip following the tsunami scare of April 11.

In his earlier comments to the press he charged that some gambling dens were run on the island with direct police involvement. He charged that gambling, lewd shows,prostitution and other illicit activities were rife in Phuket, which was at risk of its status changing from the “Pearl of the Andaman”to the “Rotten Oyster of the Andaman”.

Lt Col Sitthichai Lelasawad,who led the AHTD investigators, told the media, “Following our inspection of the Tiger Live Bar, we consider it unlikely that there was a casino there as the bars on the second and third floors were still under construction.”

He and his team came to examine a wide range of night entertainment venues, not just those operated by Tiger Group, he said.

“We were instructed by our superiors to visit Phuket and uncover ‘nude shows’ and ‘bar casinos’. Should we find such illegal activities, those responsible will be brought to justice. If we find nothing, we will submit are port reflecting that fact,” said Col Sitthichai.

“We randomly checked five places, but as yet have found nothing suspicious. After two days of investigation we have not found any evidence of human trafficking or illegal casino operations in Patong,” he said.

“If the Member of Parliament decides to retract the allegation then the investigation will be dropped,” he added.

Thamrongsak Boonrak, legal counselor to the Tiger Group, earlier said that the company’s decision whether or not to file defamation charges against MP Chuwit would depend largely on whether he apologized for his remarks.