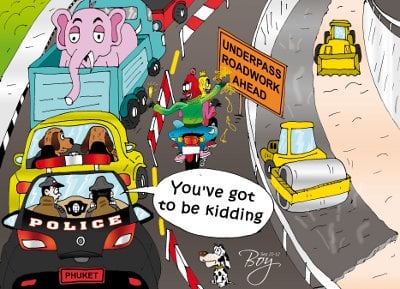 PHUKET: Work on Phuket’s first underpass is slated to start by the middle of next month, and is expected to shed harsh light on just how deplorably ‘planners’ have failed to develop Phuket’s road infrastructure to keep pace with the island’s development.

For years, Gazette readers have heard the cries of the island’s top bureaucrats calling for more responsive – if not proactive – support from their Bangkok brethren to resolve our ever-growing traffic congestion issues.

For at least a decade, those appeals fell on deaf ears despite clear evidence from the officials themselves that budgets being awarded on the basis of the registered population was not an excuse to ignore the problems anymore. Thankfully the mega-projects are coming now – always better late than never.

Thaksin himself, years ago as prime minister, rejected appeals to build the underpasses at the locations where they are now to be built. However, his sister, PM Yingluck, approved them without so much as the bat of an eyelash.

Meanwhile, it is possible that the driving force behind such grand initiatives is not the appeasement of motorists, but rather to promote positive growth in the transportation sector. The ability to move goods and people as quickly and as efficiently as possible has such a deep impact on an economy that it has quite rightly been a major feature on the Asean road map for at least a decade.

The Energy Office, and those who are trying to manage Thailand’s eternal fuel subsidy dilemma, fully understand that every time a driver taps on the brakes, whether the cargo be produce, construction materials, tourists or 11 expats on a visa run, the gas must be stepped on to regain speed. And up goes the national fuel bill just a little bit more.

The irony for most motorists in Phuket is that these grand plans to install underpasses at Central Festival; at the Samkong Intersection (at Tesco on the bypass road); and at the Bang Khu Intersection at the eastern end of the bypass road will fuel bottlenecks not far down the line.

Meanwhile, with the news announced this week of the so-called “alternative routes” suggested for motorists to avoid the Central Festival intersection chaos over the next two years, it seems Bangkok’s piecemeal approach to traffic planning is about to reap what it has sown.

Thousands of motorists have just been redirected onto much smaller roads that are plainly not designed to accommodate such enormous volumes of traffic.

The Gazette sympathizes with all residents and visitors to the island as we drive now toward what is almost surely to become a nightmare of traffic snarls radiating far and wide out of the heart of Phuket.