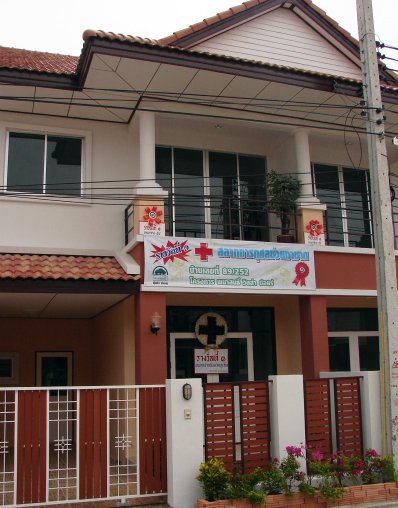 PHUKET: The Phuket Red Cross has revealed the 2.5-million-baht home that will be raffled off as top prize at its annual fund-raising fair next month.

The three-bedroom home was donated by Bangkok-based real estate developer Phanason, which has built many residential projects in Phuket in recent years.

Phanason became the first company to donate a house as the main prize at a Red Cross Fair when it donated a home at its Parkville 3 project in Thalang at last year’s fair.

A small ceremony to hand over the property’s land title was held in front of the house earlier this month.

In attendance were Phuket Governor Tri Augkaradacha and his wife Nalinee, who serves as chairwoman of the Phuket Red Cross chapter.

“We printed only 60,000 tickets, so please hurry if you want to buy one. If you do, you could be the lucky winner of a brand new house,” said Gov Tri during the event.

Tickets for all raffle prizes are 100 baht each.

If the grand prize is won by a foreigner – and as Thai law prohibits foreigners from directly owning land – it would be up to the foreigner to find a legal way to accept the prize or sell it on, a Red Cross spokesman told the Gazette.

The winner will have until February 28 to legally accept the home, or the prize will have to be “returned” to the Red Cross.

There will not be a redraw to determine another winner, the spokesman said.

For more information about the fair and the many other prizes up for grabs, click here.

Tickets are available at the Phuket Red Cross Office on Soi Sakdidet 1.