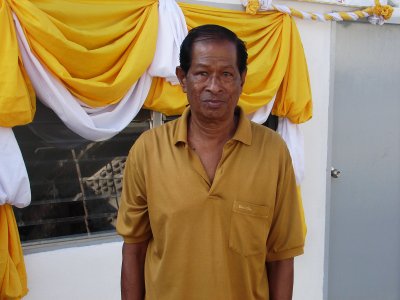 PHUKET: As Christmas fast approaches, one of the poorest elderly residents of Rassada, near Phuket Town, received a special gift this year: a complete renovation for his dilapidated, old house.

Put “Uncle Put” Nuengraksa, 73, was identified by Rassada Municipality as the most needy among five candidates living in the sub-district.

His ramshackle abode in Soi Ta Tan, near the Rassada Municipality offices on Ratsadanusorn Road, was deemed in dire need of repair – especially its leaky roof.

At the handing-over ceremony held at the refurbished house last week, Rassada Deputy Mayor Ampol O-Art handed Uncle Put his house registration book and a collection of household appliances for him to enjoy in his new home, including an electric fan, hot water jug and electric rice cooker.

Mr Ampol said the municipality spent 100,000 baht fixing the five-by-15-meter dwelling, which has two bedrooms and one bathroom. They finished off by giving the home a new coat of paint.

The free home restoration was carried out under the municipality’s annual “Homes for Locals” project conducted in honor of HM the King’s birthday.

Deputy Mayor Ampol said the project has been ongoing since 2006, with the municipality restoring one poor family home each year in honor of His Majesty’s birthday.

Modest “Uncle Put” said, “I would like to thank HM The King and everyone who helped to fix this house. I will live more comfortably in this new house.”

Uncle Put was once a fisherman, but back pain forced him to stop working 10 years ago.

Today he gets by with help from his five children, now all adults living in their own houses nearby.

UFC’s Dana White steps in to save Phuket baby