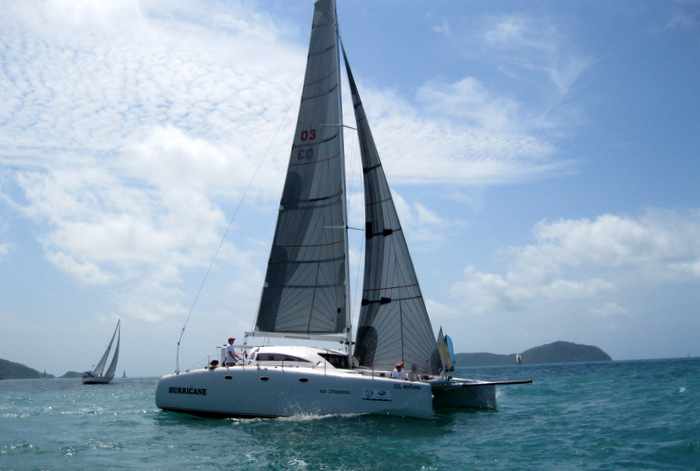 PHUKET: The signs were ominous as the boats left the anchorage this morning for Day 3 of the 2014 Cape Panwa Hotel Phuket Raceweek. Grey skies, no rustling in the trees and confusing reports from the weather professionals.

Wind Guru was predicting anything from zero to four knots and Windfinder were predicting in the eight knot range, while the Thai Meteorological Department had issued an advisory about Tropical Storm “Ramusan” warning of strong wind and waves 2-4 metres in the Andaman Sea (click here).

Principal Race Officer Simon James and his on-water team tried in vain, searching here and there for some wind while the fleet followed, giving everyone a personal tour of the southern Phuket cruising grounds in the process.

Some boats enjoyed lunch while anchored off the myriad beaches in the area as the race team continued their search but after three-and-a-half hours, with the breeze threatening again to make a showing only to go back into hiding, the inevitable happened: James called it a day and sent the fleet back to shore.

A tough day of waiting for everyone but full marks were awarded to James and his team for perseverance. While they were hunting wind, the weather gods did come out to put on a show with a stunning solar halo.

The series results remain unchanged after today (see the Phuket Gazette‘s report yesterday, story here) and with only one day left, everything counts tomorrow.

As the Thai Meteorological Department’s “typhoon warning” also applies to tomorrow, the regatta organizers and the fleet of racing crews are hoping that the “strong wind” part comes true.