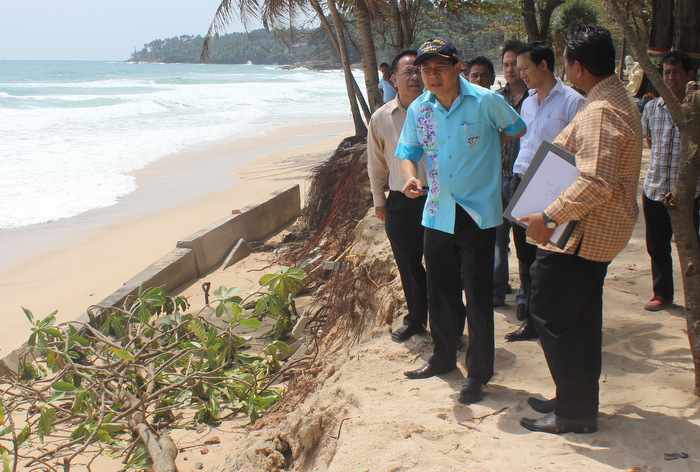 PHUKET: Phuket Governor Maitri Inthusut has pledged to support all budget requests by local authorities to combat the resurgence of coastal erosion that has plagued Phuket’s beaches during the past week.

If need be, the governor is willing to specifically declare Surin Beach a disaster zone in order to be able to release money from a disaster-relief fund in order to make temporary repairs to the Surin beachfront, he told the Phuket Gazette.

Governor Maitri announced the news yesterday during a visit to Surin Beach, where he inspected the damage inflicted by pounding seas that pummeled a makeshift seawall to pieces and threatened to topple a lifeguard tower earlier this week (story here).

“I have to find a solution to this problem to prevent it from happening in the future,” Governor Maitri said.

“In the short term, the Cherng Talay OrBorTor [Tambon Administration Organization] will clear the beach of all the rubble and re-landscape the area to make it beautiful again for the [tourism] high season.

“For the long term, I have ordered the Public Works and Town and Country Planning office to inspect all of Phuket’s beaches and to come up with a feasible permanent solution to prevent coastal erosion at each beach.”

However, Governor Maitri agreed that so far the most likely solution was the installation of seawalls of varying sizes at each beach along Phuket’s west coast, similar to the one proposed by Cherng Talay Mayor Ma-ann Samran earlier this week (story here).

Gov Maitri pointed out that by declaring Surin Beach a “disaster zone”, he could allow the Cherng Talay OrBorTor to use 20 million baht from a disaster-relief fund to make temporary repairs to the Surin beachfront.

“So far we have received no reports of local residents needing these funds to repair their homes or businesses,” Gov Maitri explained.

“If we declare Surin Beach a disaster area, we could use this reserve to help them by quickly repairing the beachfront to prevent more damage being done before the tourism high season arrives.”

Governor Maitri said he was willing to do the same for other areas in Phuket in dire need of a defense from coastal erosion.

“I will support budget requests from any other local administrations in Phuket who need to help people who have been severely affected by coastal erosion and large waves damaging their properties,” he said.