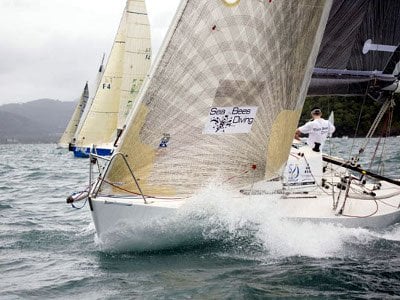 PHUKET: The organizers of the Phuket Raceweek 2012 regatta have confirmed that this year’s event will go ahead, specifically from July 18-22.

However, a “home venue” has yet to be confirmed for the annual yachting event, which was voted “Best Asian Regatta of the Year” at the Asia Boating Awards 2011.

The five-star Evason Phuket & Six Senses Spa in Rawai has long been the traditional “home” of the event, hosting the registration and main regatta parties since the inaugural event in 2004.

In an email marked “Don’t Believe Everything You Hear! Phuket Raceweek 2012 Is On”, organizers announced, “After eight excellent years at Evason Phuket, the regatta must move. Ownership changes, plans to sell the property and so on left Phuket Raceweek organizers looking for a new host venue. With venue negotiations drawing to a close, an announcement can be expected soon.

“In the meantime, the regatta is definitely on. The racing area will be the same as for the past 8 years – Chalong Bay and surrounding islands. Excellent breezes are expected…,” said the release.

Returning sponsors at this year’s Phuket Raceweek include Presenting Sponsor Mount Gay Rum returning for a second year at a higher sponsorship level due to last year’s success, added the email.

“So don’t hesitate to make plans. As soon as the regatta venue is confirmed, accommodation options will be announced. The regatta is run during low season Phuket, so plenty of rooms are available,” it read.

Phuket Raceweek, run over six or seven classes, including cruising, bareboat and charter yachts, has gained a reputation for its competitive racing for the serious boats and fun courses around the islands for the less serious racers.

It is also the first event on the 2012/2013 Asian Yachting Grand Prix Circuit.

The Phuket Gazette, PGTV and The Nation are proud sponsors of Phuket Raceweek.