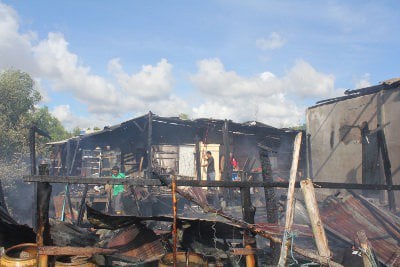 PHUKET: A 12-year-old boy home alone had a lucky escape from his house on Tuesday morning, as fire broke out in the poor Soi Kingkaew community in Rassada, north of Phuket Town, destroying two homes.

Suriya Inkaew was home alone while his mother, 56-year-old Gaysorn Yungyeun, was out collecting recyclables from trash to make a living.

“I woke up to a strange sound and when I opened my eyes I saw the house was on fire, so I ran out as fast as I could and shouted for help,” said Suriya.

Soon after he ran out of the house, flames consumed the building and moved on to the house next door.

Officers at Rassada Municipality were notified of the fire at 7:55am, and quickly responded, arriving in numbers with firemen, who took 20 minutes to extinguish the blaze.

By that time, however, ashes and rubble was all that remained of Suriya and Ms Gaysorn’s home.

From the police initial investigation, the fire started at the back of the house.

Plueng Srisattabun, the 77-year-old owner of the house next door that was also destroyed by the fire, said that he was not home when the fire broke out.

“I went to temple early this morning, so there was no one at my home when the fire started,” he said.

However, police and fire investigators have yet to determine what started the blaze.