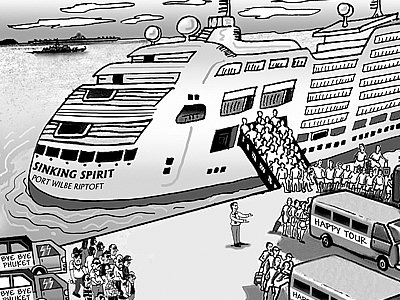 PHUKET: The latest fiasco at Phuket’s Deep Sea Port once again underscores the need for an immediate overhaul of the island’s public transport system, but the results of the talks that ended this latest blockade confirm that reform will not be coming soon.

After we reported the events of April 6 in the Gazette Online, there was a deluge of comments in our readers’ forum. Words like “corruption”, “extortion” and “shameful” were among the most popular to describe the situation.

At the ‘negotiating’ table, leaders of the 160 tuk-tuk and taxi drivers represented by the local Ao Panwa transport collective made it quite clear that their blockade was all about money. The drivers want to maximize their fares, while tourists, who had pre-booked their local transport with the Sea Tour travel agency, wanted reasonably priced and courteous service.

Knowing this, Sea Tour did its best to provide its clients with the guided half-day tours to which the company had committed. This was with good reason, the internet being quick and brutal (and not always fair) in its exposure of sub-standard service providers to millions of travellers on a daily basis.

Most present at the negotiations felt that Marine Police chief Phuripat Theerakulpisut did a good job working out an agreement and ending this week’s impasse – by getting the tour agency to agree to giving the tuk-tuk and taxi drivers access to half of the agency’s customers. Sadly, no one present pointed out that the drivers had no legal basis to make such demands, or that their blockade at a government installation was clearly illegal.

Although some readers might be surprised to learn this, reporters who talked with the drivers did not come away with the impression that they were dealing with mobsters. Indeed, one characterized the drivers as “just working-class people who sincerely felt that they were simply doing their best to provide for their families.” This indicates an enormous gap in perception on both sides.

One of the arguments made by the manager of the Sea Tour group at the negotiations was that she wanted her guests to enjoy their Phuket tour with English-speaking guides.

Unfortunately, the drivers remain adamantly opposed to this, insisting that they have the English-language skills to conduct the tours themselves.

But as every new tourist to the island soon learns, such tours all too often involve trips to jewelry shops, custom tailor outlets and other operations that pay tidy commissions for each “head” delivered.

Do furtive commissions and blockades really convey the kind of first impression Phuket wants to create among “quality tourists” such as cruise ship passengers?

It’s high time the central government took a more active role in solving the Phuket public transport crisis. No one would argue that locally based officials – despite sincere efforts in some cases – have ever had any success in eradicating this syndicated blight on Thai tourism.