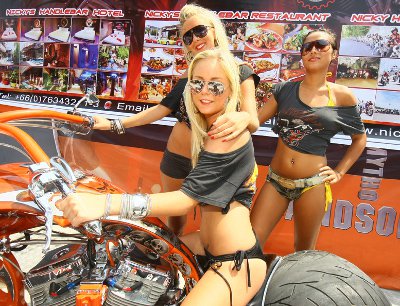 PHUKET: The official festivities for Phuket Bike Week 2011 draw to a close in Patong tonight after another full day of big bike fun and games, live music and road trips around the island.

At 4pm today, a convoy of riders will leave Loma Park on Patong Beach, the main rallying point and concert venue for Phuket Bike Week this year.

The convoy will head south on a two-hour, 30-kilometer round trip to Phuket’s iconic peninsula Laem Phromthep, the southernmost point on the island, passing through Karon, Kata and Nai Harn en route.

From 9pm to 10pm on the main stage will be the very popular Thai country music artist “Bowie”, famed throughout Southern Thailand.

Bowie hails from Trang province and is probably best recognized in Phuket as the “thumbs-up” man on the Toyota Vigo billboard advertisement that stood at the northern end of the bypass road for months at the end of last year.

After Bowie’s concert will be the final round of the Miss Phuket Bike Week 2011 from 10pm to 11pm.

The three-day Bike Week official program will close with more live music from 11pm until midnight.

All during the entertainment on stage, from 3pm through to midnight, a collection of big and other custom bikes will be on show at the football field across from Loma Park.

With the official activities behind them, the riders will enjoy the next two days on road trips in and around Phuket.

Expect many of the 6,000 or so riders to stay on the island for Songkran (Thai New Year), which starts on Wednesday.